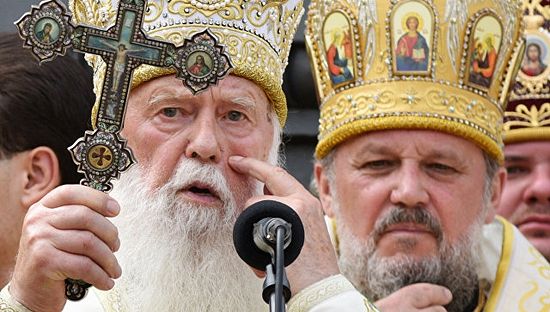 The Russian Orthodox Church has stated that the letter received by it from former Metropolitan of Kiev and current leader of the schismatic “Kiev Patriarchate” (KP) Philaret (Denisenko) with a proposal to reconcile and to overcome the Church schism in Ukraine is real and written by Philaret himself, RIA-Novosti reports.

The Council of Bishops had earlier resolved to establish a commission for discussions with the schismatic members of the KP, to be headed by Department for External Church Relations Chairman Metropolitan Hilarion (Alfeyev) of Volokolamsk, considering Philaret’s letter, in which he writes, “I ask forgiveness for every way in which I have sinned in word, deed, and in all my senses, and I sincerely forgive you all from my heart,” as an important step towards overcoming the 25-year schism in Ukraine.

In turn, KP Press Secretary Archbishop Evstraty Zorya responded that “Philaret never sent and will not send the Russian Orthodox Church, Patriarch Kirill, or anyone else an appeal for forgiveness,” explaining that the head of the schismatic group does not consider himself guilty of violating the canons for which he was declared anathema by the Russian Church in 1997.

In 1992, then-Metropolitan Philaret, who was elected the Locum Tenens of the Muscovite patriarchal throne following the 1990 death of Patriarch Pimen, demanded autocephaly for the Ukrainian Orthodox Church. When his demand was denied, he created and legally registered the self-styled “Kiev Patriarchate.” None of the 15 canonical Local Orthodox Churches recognize or have communion with Denisenko’s group.

The Church’s statement comes in response to the statements of Abp. Evstraty, and of and others, including various media outlets, questioning the authenticity of the letter, considering the current climate of Russian-Ukrainian relations, and the ongoing aggression against the canonical Ukrainian Orthodox Church by members of the KP.

“We are talking about an actual letter, which I have held in my hands, with the signature of the former Metropolitan of Kiev and All Ukraine Philaret,” Deputy Chairman of the Department for External Church Relations Archpriest Nikolai Bashalov told RIA-Novosti. Fr. Nikolai was also appointed a member of the newly-formed commission for dialogue with the Ukrainian group.

He emphasized that the Church is not responsible for any misinterpretations being put forth in the media, and that all interested in overcoming the schism in Ukraine, “the consequences of which have very painfully impacted the state of civil peace in Ukraine and the relations between our fraternal peoples,” should carefully read what has been posted on the Russian Church’s official website.

Chairman of the Department for External Church Relations Metropolitan Hilarion (Alfeyev) of Volokolamsk noted that news agency Interfax-Religion had incorrectly reported the essence of Philaret’s letter, and that the letter was, in essence, a request for negotiations rather than pardon.

The KP press secretary later clarified that Philaret did indeed send a letter to the Russian Council of Bishops, with an aim to “renew the possibility of prayerful union,” although there was no request for a reunification of the Churches. According to Zorya, the only dialogue that Philaret is ready to engage in with the Russian Orthodox Church is on the matter of Moscow’s recognition of Ukrainian autocephaly, not on some repentance or return to its structure. The schismatic patriarch has requested that his excommunication and anathematization by the Russian Church be declared null and void from the beginning, as they represent obstacles to Eucharistic communion.

However, as Church historian Vladislav Petrushko notes, such a move would require true repentance on Philaret’s part. “I do not see repentance for concrete sins in his appeal. He must attest to the sincerity of his repentance, and not just express his desire for mutual forgiving of one another,” Petrushko said, adding that, only were Philaret to repent of the grievous sin of schism and to call all his followers to return to the Mother Church would there be real grounds for removing the ecclesial sanctions against him.

Despite the more limited nature of Philaret’s proposal, Archpriest Nikolai Danilevich of the Ukrainian Orthodox Church-Moscow Patriarchate, also appointed as a member of the newly-established commission, believes it took courage for Denisenko to send such a letter, RIA-Novosti relates.

“In his situation it is a courageous, and consequently, a positive step. It is obvious that Philaret is approaching the sunset of his life, and in the face of eternity, ambitions, positions, honor, and even resentment lose their appeal,” Fr. Nikolia stated. In his view, the fact that the appeal was sent shows that Philaret “understands that he has perpetrated a schism, and that his anathema is still ‘working.’” He also echoed the words of historian Petrushko, that when the schism is abandoned, then his anathematization can be lifted.

The Ukrainian priest also urged restraint in the prospects of overcoming the schism and expressed hope that Philaret “will not succumb to pressure from the radical and nationalist forces, of which there are many in his structure, and that he will not listen to those in power, whose advice already once led him into schism in the beginning of the 1990s.”

The Church also hopes that Philaret’s letter represents a willingness to renounce the violence against canonical churches, clergy, and believers that persists in Ukraine. According to Fr. Nikolai Balashov, the Russian Church believes the proposal for dialogue coming from the KP, “implies a willingness to renounce such actions in relation to the Ukrainian Church, which have been practiced in the past.”

The decree accepted yesterday by the Russian Council of Bishops mirrors Fr. Nikolai’s words, naming specific concrete steps for overcoming the schism in Ukraine: “A firm rejection of violence and the seizure of churches, a rejection of mutual accusations and reproofs, and mutual forgiveness of one another’s old grudges—these are the healing means of self-sacrifice and love of Christ which are the only means by which the unity of the canonical Church in Ukraine can be restored.” Leader of Ukrainian schismatics Philaret reportedly asks forgiveness from Russian Orthodox Church
Philaret’s letter ends with “I ask forgiveness for every way in which I have sinned in word, deed, and in all my senses, and I sincerely forgive you all from my heart.”
Comments
×