“Pat.” Philaret appeals to ROCOR on matter of autocephaly, though not for his “Kiev Patriarchate” 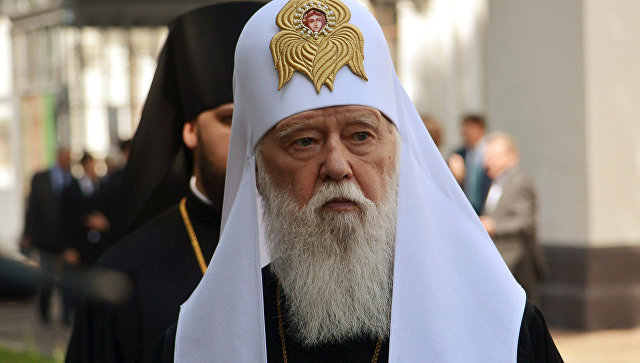 In the letter, “Pat.” Philaret speaks of the need for Ukrainian autocephaly in order to heal the Church schism there.

Both letters, the first being addressed to His Holiness Patriarch Kirill and the Council of Bishops of the Russian Orthodox Church, which gathered in Moscow from November 29 to December 2, are both dated November 16, though the letter to the Council was already made publicly known during the convening of the Council, causing a major stir in the media, which initially reported Philaret’s address as an act of repentance for the sin of schism and an appeal to be received again into the Russian Orthodox Church.

However, KP Press Secretary Archbishop Evstraty Zorya soon responded that the letter was being misread and that Denisenko and the KP were interested only in discussing the possibility of the Russian Orthodox Church lifting the anathemas against Philaret and recognizing the autocephaly of the KP. However, it should be noted that the letter to the Council says nothing of autocephaly. 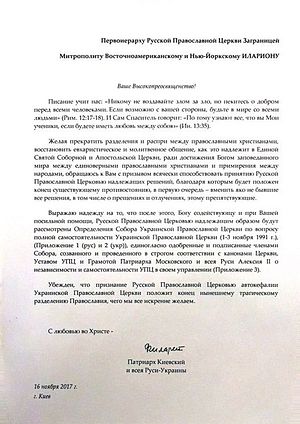 The content of the two letters is largely the same, expressing the desire to restore Eucharistic communion, with the relevant excommunications and anathemas being lifted, differing only in the last two paragraphs. Of note, in the letter to Met. Hilarion, “Pat.” Philaret speaks of the need for the Russian Orthodox Church to recognize the autocephaly of the Ukrainian Orthodox Church, though he does not specify that he is speaking of his Ukrainian “Kiev Patriarchate” Church. The canonical Ukrainian Orthodox Church (UOC), an autonomous body with the Moscow Patriarchate, is headed by His Beatitude Metropolitan Onuphry.

I express the hope that from hereafter, God-willing and with your feasible help, the Russian Orthodox Church will properly review the Definition of the Council of the Ukrainian Orthodox Church on the question of the full independence of the Ukrainian Orthodox Church (November 1-3, 1991), unanimously approved and signed by the members of the Council, convened and conducted in strict accordance with the canons of the Church, the Statutes of the UOC and the gramota of Patriarch Alexei II of Moscow and All Russia on the independence and autonomy of the UOC in its management.

Note that the Council of Bishops, at their most recent meetings, resolved to amend the statutes of the Russian Orthodox Church to more fully and accurately reflect the autonomous nature of the canonical Ukrainian Orthodox Church, noting that its administration is centered in Kiev, rather than Moscow. His Beatitude Met. Onuphry proposed this measure specifically to more fully reflect the independence and autonomy spoken of in Philaret’s letter.

This increased level of independence can be seen, for example, in the Ukrainian Church’s recent opening of two parishes in Portugal. The blessing for the parishes came not from Pat. Kirill, but directly from Met. Onuphry himself.

However, Denisenko has called this amendment to the Russian Church’s statutes a deception.

Meanwhile, in a recent interview with risu.org.ua, KP Press Secretary Archbishop Evstraty Zorya stated he believes that reconciliation with the Russian Church is inevitable, putting an end to the “hot or cold war.” He explained that as the Russian Church and the various Ukrainian Churches exist and operate within the same sphere, a resolution is necessary for peaceful living. He also explicitly confirms the KP’s willingness to dialogue, while reiterating that it will never accept the model of “repent and rejoin.”

What precisely is the KP’s aim remains unclear, with varying and contradictory statements coming via letters, press conferences, and Facebook statements. Russian Church certain of authenticity of “Pat.” Philaret’s letter
The Russian Orthodox Church has stated that the letter received by it from former Metropolitan of Kiev and current leader of the schismatic “Kiev Patriarchate” (KP) Philaret (Denisenko) with a proposal to reconcile and to overcome the Church schism in Ukraine is real and written by Philaret himself.

Leader of Ukrainian schismatics Philaret reportedly asks forgiveness from Russian Orthodox Church
Philaret’s letter ends with “I ask forgiveness for every way in which I have sinned in word, deed, and in all my senses, and I sincerely forgive you all from my heart.”
Comments
×