Archbishop Anastasios given Albanian citizenship after 25 years of ministry 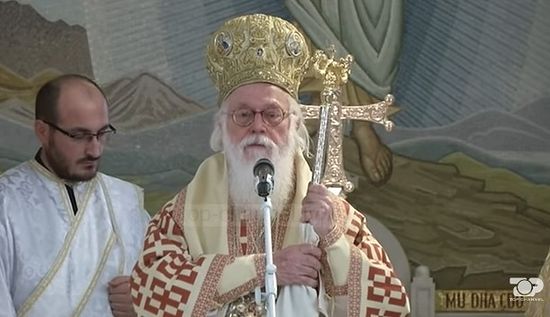 In a letter delivered on Sunday, His Excellency Ilir Meta, President of the Republic of Albania, offered his heartfelt congratulations to His Beatitude Archbishop Anastasios of Tirana, Durrës and all Albania who was granted Albanian citizenship by presidential decree no. 10700 on Friday, reports the site of the Albanian Orthodox Church.

The letter was handed to the archbishop at the Synodal Center of the Orthodox Autocephalous Church of Albania by Ambassador Arben Cici, director of the Albanian president’s cabinet. In his letter, the president refers to the great contribution of the archbishop “who has contributed with devotion to the complete canonical and spiritual revival of the Orthodox Autocephalous Church of Alabania” in his work “in the field of education, health, social welfare, rural development, culture, and the environment,” and “for his contribution to maintaining the harmony, tolerance, and coexistence of the Albanian people.”

The president also recalled that the Abp. Anastasios has been decorated with many titles of honor over the years.

For his part, the archbishop expressed his joy and thanked the president for his decision to grant citizenship, noting that he had felt like an Albanian ever since his ministry in the country began 25 years ago.

“Time adds value to some things, like wine,” the Albanian primate said, “Of course, my 25-year experience gives this decree a special weight and importance.” Anthony 12/27/2017 11:38 pm
Imagine gaining Albanian citizenship. I could only dream- Cue The Eurythmics ''Sweet dreams are made of this
Who am I to disagree?
I travel the world
And the seven seas,
Everybody's looking for something.''
×