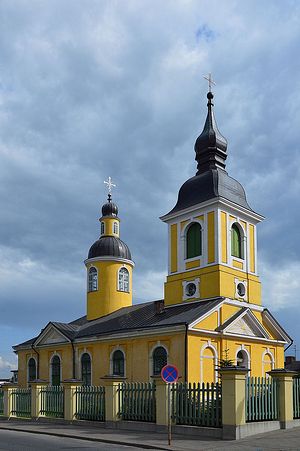 Saint Catherine's Estonian Apostolic Orthodox Church in Võru. Photo: wikipedia.org
The Estonian government decided on Thursday to allocate 8.2 million euros ($9,828,110) to churches operating in Estonia as compensation for damages received during the course of the war and occupations of the previous century. Among them, the Estonian Apostolic Orthodox Church of the Patriarchate of Constantinople (EAOC) will receive 1.4 million euros ($1,677,970), reports Interfax-Religion.

The Estonian Evangelical Lutheran Church will also receive 6.8 million euros ($8,150,140), which it will use to restore churches and build and refurbish cultural buildings, and to invest in social activities.

“The funds are allocated … to compensate the Churches for material damage received in the course of the war and occupation. The government and Churches have reached an agreement that with the granting of the donation, the Churches will abandon old property disputes,” stated Minister of Public Administration Jaak Aab at a press conference yesterday.

The EAOC plans to continue the construction of the already-active convent on the island of Saaremaa and to build a men’s monastery.

Parliament Deputy Hiemar Lenk, from the ruling Center Party, stated on Estonian radio on Thursday that funds are being allocated to the EAOC due to the government’s desire to compensate for the loss of the Pskov Caves Monastery, which was within the Republic of Estonia before the Second World War.

“As far as I know, [the allocation of funds] is designed to be compensation for the fact that the Pskov Caves Monastery has remained on the other side of the border. But the question arises: If we’re giving money to one of the Orthodox Churches, then why are we not giving to the Orthodox Church of the Moscow Patriarchate? They all suffered in the war,” the deputy noted.

There are currently two canonical Orthodox jurisdictions operating in Estonia: the Estonian Orthodox Church of the Moscow Patriarchate and the Estonian Apostolic Orthodox Church of the Ecumenical Patriarchate, the latter being established in the early 1990s. The Constantinople Church obtained most of the church properties following the fall of the Soviet Union, though according to 2004 government data, the Constantinople Church has about 20,000 faithful in 54 parishes, while the Moscow Church has about 150,000 faithful in 30 parishes.

In February it was announced that the capital city of Tallinn was allocating 50,000 euros ($53,100) for the restoration of the Church of the Nativity of the Theotokos which was set on fire in 2009. Tallinn authorities and the Estonian Council of Churches allocated 14 million euros ($201,11,000) for restoration at that time, at which point it was discovered that the church was in an extremely poor state overall. It is the country’s oldest surviving wooden church. His Holiness Patriarch Alexei II of Moscow and All Russia served as rector there for 16 years in the middle of the 20th century. Estonian capital allocates $53,000 to restore Orthodox church
The Kazan Church was built in 1721, the first in Tallinn after Estonia was annexed into the Russian Empire. It is the country’s oldest surviving wooden church, where Patriarch Alexey II of blessed memory served as parish rector for sixteen years in the middle of the previous century. Estonian Orthodox church iconostasis and icons named cultural monument
The Orthodox Church was built in Kolga-Yani (near the city of Tartu) in the 1870s. At the same time it was decided how to decorate the church, including the wooden iconostasis, icons, and altarpiece with frame behind the iconostasis. In all, nineteen sacred images, surrounded by wooden decorated designs, were included as monuments.
Comments
×