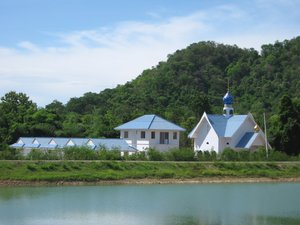 The ceremony of minor consecration of the Holy Assumption Monastery and its opening was held in the Ratchaburi province, Thailand.

The monastery and its church were consecrated by the Russian Orthodox Church representative in Thailand Archimandrite Oleg (Cherepanin). In attendance were Orthodox priests, the officials of the Russian embassy, Thai authorities, Protestant and Catholic communities of the country, and many pilgrims, the official website of the Moscow Patriarchate reported Friday.

"The Orthodox history in Thailand cannot be viewed separately from the Russian Orthodox Church. Now we can evidence the appreciation of and respect to religious and cultural traditions of Thailand shown by Orthodox clergy in their activities," the secretary of the Parliament Defense Committee Akachai Chintoza said at the ceremony.

He called Father Oleg "a great friend of Thailand" and presented him with a large diamond cross specially made for this occasion as a sign of recognizing his merits to the Thai people.

The construction of Holy Assumption Monastery started in November, 2009 when the Orthodox Church Fund in Thailand purchased the land of 9,000 square meters to construct the church and the Orthodox cemetery.

Currently, the monastery includes a completed church, a chapel, father superior's quarters, monks' cells, household premises and a garden. The monastery plans to build a school and a belfry.

Their are currently citizens of Russia, Romania, Thailand and Laos who wish to join the monastery. By the blessing of Patriarch Kirill, the list of brethren will be submitted for the approval of the Moscow Patriarchate department for foreign institutions.