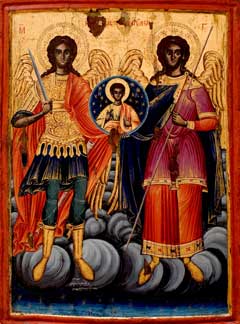 Scotland Yard has identified the alleged mastermind behind a ring that has been stealing religious icons from churches and monasteries in Epirus and Thessaly which subsequently ended up at European auction houses.

According to the Greek authorities, police in Athens were informed of the identity of the mastermind, who is from Thessaly, by their British counterparts. The person has yet to be taken into custody, however, as his or her whereabouts are currently unknown.

The information that led to the ring leader’s identification was provided by a London gallery following the online identification of six Byzantine icons that the gallery was planning to sell. The icons were recently returned to the monasteries they belong to in the area of Ioannina, northern Greece. It is believed that the alleged ring leader had claimed the icons were family heirlooms from his father’s personal collection.

Besides the aforementioned relics, the London gallery has also handed over another 10 icons to the Greek Embassy in the British capital which have also been identified through photographs as having been stolen from monasteries in Epirus and Western Macedonia. Meanwhile, the gallery has removed another 60 icons from its Internet site that had been heading for auction and had been supplied by the illicit Greek dealer.

It appears, however, that the smuggling ring had been supplying various art spaces around Europe. Another nine Byzantine icons, all taken from churches and monasteries in Epirus and Grevena, were identified and seized at two auction houses based in Amsterdam.

The international search for the icons began after an electronic database of stolen Byzantine treasures was posted online by the former Ioannina prefecture.

Initially, Greek police located a number of works at secondhand stores in Athens, before extensive investigation in collaboration with Interpol led them to Berlin, London and Amsterdam.

According to sources, the police are confident that the information they have gathered will help them to smash the ring, which is believed to be behind the disappearance of hundreds of Byzantine icons and other religious objects, including pieces of icon screens and communion cups.