Committee formed for Jasenovac at Holocaust Studies in Ohrid 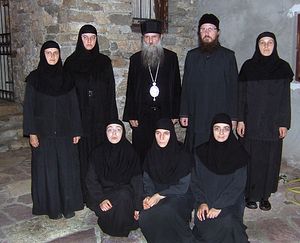 From September 26 to October 2, 2011, an international seminar on Holocaust research entitled, The Diverse Survival Strategies of Jewish and Roma Communities in Macedonia: From Resistance to Memorialization, took place in Ohrid. The coordinators of the Committee for Jasenovac was Bishop Jovan Culibrk of Lipljan, member of the Holy Assembly of Bishops, and associate of the Committee, monk Pavle Kondic. The seminar was organized by the Institute for social and humanitarian sciencies of the Euro-Balkans from Skopje, in the cooperation with the International work group for Holocaust research, and the program of the Ohrid Summer University (OSU), reports the official website of the Serbian Orthodox Church.

Sixteen scientists from many European countries participated in the seminar. Introductory lectures were given by Dr. Krinka Vidakovic Petrov from Belgrade, Dr Sofija Grandakovska from Skopje, and professor Michael Stuart from London, who particularly dealt with the genocide against the Roma during the Second World War. All participants of the Summer University had special exposure, including Bishop Jovan on the theme Paratrooper Yishuva from Macedonia: the case of the absence of Nisim Testa-Arazi, and monk Pavle on the theme The Roman Catholic bishopric of Skopje on the religious map of the Kingdom of Yugoslavia 1924-1941.

During the seminar there was a promotion of the collection of works and documents on the suffering of Jews from Macedonia and Holocaust history, theory, and culture, which was prepared by Dr. Sofija Grandakovska, and presented by Dr. Krinka Vidakovic Petrov and Bishop Jovan of Lipljan, who are coauthors of the collection.

During its stay, the delegation of the Committee for Jasenovac visited Bishop David of Stobi, and prayed at the shrines of the Lake of Ohrid.