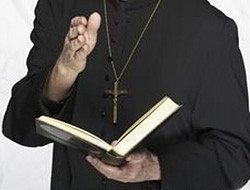 The Vatican's newly-designated Secretary of State Pietro Parolin has said that priestly celibacy is an issue up for discussion within the Catholic Church.

The Vatican has opened its door to the possibility of married priests, a move that would go against centuries-old Church tradition. Vatican ex-advisor converts to Orthodoxy and becomes a monk in Moscow monastery
Father Constantine adopted Orthodoxy in 2014, after 34 years of priestly ministry in the Roman Catholic Church. Catholics rethink celibacy rule. Theologians in Europe worry about waning
Shrinking parishes, a dwindling number of clergy and the taint from the Catholic Church‘s sex-abuse scandal are prompting calls in parts of Europe for church leaders to re-examine some of the institution’s basic policies.