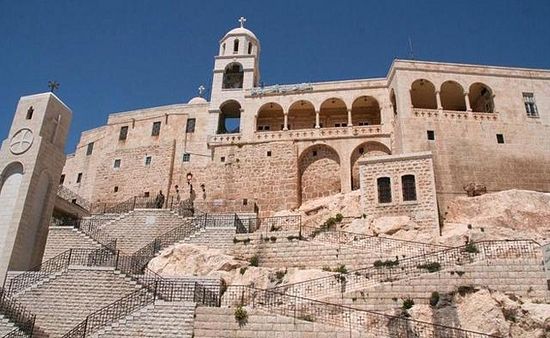 The Orthodox Convent of Nativity of the Mother of God

Saidnaya is the next Christian city after Ma'loula which may be attacked by terrorists. This settlement, situated in 35 kilometres away from the Syrian capital of Damascus, actually a complex that includes several monasteries of different Christian denominations, is a site of annual pilgrimage of thousands of the faithful from all over the world. Thus, the Orthodox Convent of Nativity of the Mother of God keeps one of the greatest relics of the Christian world—the icon of the Mother of God, known as "Saidnaya Icon", which, according to a tradition, was painted by Holy Apostle and Evangelist Luke.

It is precisely this Convent which became the first Christian shrine to be attacked by the rebels. This happened nearly two years ago, on January 29, 2012, when it was fired upon by the militants. One shell broke through the wall and got into a monastic cell, but did not explode.

"The Most Holy Mother of God Herself prevented explosion of this shell," said then the Abbess of this convent Mother Verona Nabhan. They were, of course, frightened with the events, but remained calm. Now the war is ready to swallow up this holy site as well.

According to one agency that covers the activity of Patriarch of Melkite Church of Antioch Gregory III Laham, unidentified groups the day before attempted to filter into Saidnaya, but after a fierce defense by local residents scared by the events in Ma'loula, they turned back. As a result of the armed conflict one young man—a parishioner of a Roman Catholic Church—was killed.

At the same time, in the town of Yabrud of the Damascus region, four shells were fired at the Roman Catholic Church, which caused the destruction of its dome as well as of the cultural and educational center. The same situation is seen in other Syrian settlements: an Orthodox Church was burned down in a north-eastern town of Al-Hasakah.

Also in connection with the events in Rakka, where extremists desecrated two town Churches, Patriarch Gregory III Laham addressed the flock with a special speech: "Syria has never experienced this kind of vandalism and inter-religious conflict,” he stressed. “The Syrians never do such things. These are simply provocations by foreign groups who are threatening us, the Christians of this country".

Orthodox Priest Father George Boulous reported to news agencies that "Christians of Rakka have become victims of inter-religious war and were forced to flee". The priest has also called the events in the town "a battle for the sake of money and power".

It should be noted that clashes between various "opposition" Muslim groups are taking place in Rakka. Several days ago it became known that the Italian Jesuit Priest Paolo Dall'Oglio had been kidnapped in the town. Radicals in Sadad: they have crossed the Rubicon

Radicals in Sadad: they have crossed the Rubicon
No matter where Al-Qaida goes, it leaves a long, bloody trail of destruction and murder. The Syrian town of Sadad is no exception on the “service list” of Takfiri[1] organizations, which includes terrorist brutalities. The ancient Christian holy sites humbly accepted this cross also—the now common cross of the entire Middle East… We will tell it like it is: The picture before us (and recorded by our camera) was simple horrifying; by its scale and drama it is incomparable to any single tragedy in the Syrian chronicles of recent years.