The Song of Simeon, the Presentation of Christ, and the Greek Old Testament 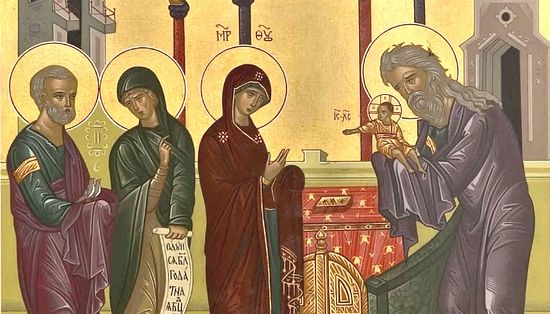 February 2nd marks the celebration of one of the twelve Great Feasts of the Orthodox Church year: The Presentation (or Meeting) of Christ in the Temple.

This is a feast that recalls the Gospel story of the infant Christ being presented to the elder Simeon in the temple (Luke 2:25-32), a man of great age. The Nunc dimittis or Song of Simeon is a recorded response as this old, frail servant of the Lord beholds the incarnate Lord of Glory for the very first time. In this moment, he knew his life was complete; he had fulfilled his purpose.

Interestingly enough, there is a significant back-story to this presentation of Christ, and to the elder Simeon’s response.

The Great Library of Alexandria—established during the reign of Pharaoh Ptolemy II Philadelphius (ca. 283–246 B.C.) and originally organized by a student of Aristotle—contained an innumerable cache of manuscripts, written works, and scrolls from around the world. In order to ensure everything possible was included in their library, the Alexandrians would require all citizens—and even foreign travelers through Egypt—to hand in their own scrolls for copying so that they could be added to the library. It is during this period that the scriptures of the Jewish people were first translated into Greek—the lingua franca of the world—in order to be included in their already-impressive collection.

In order to have the scriptures accurately translated, Ptolemy II summoned seventy (or perhaps seventy-two) scribes from Palestine to Alexandria. These were scribes familiar with both languages and with an intimate knowledge of the scriptures themselves. Initially, the Pentateuch (the five Books of Moses) was translated, with the rest of the scrolls to follow in succeeding generations. In an event that was no doubt guided by the Holy Spirit (as Justin Martyr, St. Augustine, and others attest), all seventy scribes translated identical copies of the books from Hebrew into Greek.

After its completion, this Greek edition of the scriptures was called the Septuagint (“seventy”), as a nod to the seventy scribes who performed the work. The use of the Septuagint (abbreviated “LXX”) spread throughout the Greek-speaking world, becoming the eminent and most widely-used edition of what we now call the Old Testament—a term first coined by Melito of Sardis in the second century (A.D.). The LXX was so commonly used at the time of both Christ and his apostles that the overwhelming majority of their references to scripture came from this translation, with many of the parables, stories, and other wisdom teaching of both Christ and his apostles being taken directly from that corpus. There are several key messianic passages in Hebrews, for example, that would be rendered nonsensical were Paul not quoting the Septuagint.

The Greek Old Testament was the divine scripture for the early and apostolic Church—prior to the completion and worldwide distribution of the New Testament—and has been received as the Old Testament for the eastern churches ever since. Most Protestant scholars still assert that there was a “silent era,” absent of divine prophecy, between the end of their augmented canon—beginning with the time of Ezra and lasting until the time of the apostles—but Orthodox Christians believe that God continued to speak to his people, that prophets still arose (such as John the Forerunner and the prophetess Anna), and that the writings of this so-called inter-testamental period are true scripture, along with the rest of the Old Testament.

So where does Simeon fit into all of this?

When translating his scroll, Simeon came across the text: ”Behold, a young woman (almah) shall conceive in the womb, and shall bring forth a Son” (Isa. 7:14). Although possible, he found it hard to believe that virgin was the correct reading, given the impossibility of a virginal conception. When he determined to translate “young woman,” the archangel Gabriel appeared to him. The angel told Simeon that virgin was, in fact, the correct word to use, and that he would live to see the day when this would be fulfilled—the birth of the Messiah by a pure and spotless virgin. And so, Simeon obeyed the angel, using the word virgin in his translation.

When we hear the Gospel of Christ being brought into the temple as an infant, the elder Simeon is there—after all this time—waiting to see the prophecy fulfilled as the angel foretold. He soon recognizes that Jesus was in fact the Messiah of Israel, born of a virgin. He responds appropriately:

“Lord, now lettest thou thy servant depart in peace, according to thy word; for mine eyes have seen thy salvation which thou hast prepared in the presence of all peoples, a light for revelation to the Gentiles, and for glory to thy people Israel.”

And his father and his mother marveled at what was said about him; and Simeon blessed them and said to Mary his mother, “Behold, this child is set for the fall and rising of many in Israel, and for a sign that is spoken against (and a sword will pierce through your own soul also),
that thoughts out of many hearts may be revealed.” —Luke 2:29–35

Simeon knew he could now depart in peace, as all had taken place according to the word given to him by the archangel Gabriel. And according to Orthodox tradition, he reposed the next day.

The feast of the Presentation is not only a reminder of the faithfulness of the men and women who helped preserve our scriptures down through the ages, but also of the joy and reverence that should fill our hearts as we behold the Lord of Glory. As members of the Body of Christ, we are connected in and through Christ with one another in the mystery of the Eucharist, and when we partake of his body and blood, we are transformed anew into his likeness. Does the Pure One Have Need of Purification?
We see here that the KJV erroneously translates this verse to read "days of her purification". However, a puristic translation of the text would be translated as "days of their purification".

The Meeting of Our Lord
Archbishop Dmitri (Royster)
God literally entered the world, into time and history. He was physically present in the midst of His people, His creatures whom He loves. Our Lord took on human nature in order to reconcile unto Himself, man who had strayed far from the Source of his life.