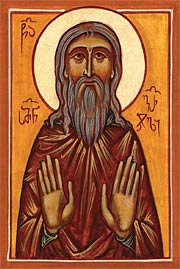 Saint Svimeon was raised at Davit-Gareji Monastery. He labored as a simple monk until he reached an advanced age, and was chosen to be abbot. Outstanding in virtue and humility, St. Svimeon was endowed by the Lord with the ability to work miracles.

Once St. Svimeon became deathly ill and lay lifeless for more than an hour. Then, by Divine Providence, he arose and distributed all of his possessions to the fathers of the monastery to keep him in remembrance.

When St. Serapion heard about this miracle, he hastened to Abbot Svimeon, his spiritual father, and, enlightened with prophetic grace, comforted him: “O honorable Father, give me your holy hands that I may kiss them. How I desire for these hands to bury the dust of my worthless body—but nowyou are departing this world ahead of me. You will go, Father, but without you I will not remain long on this earth; soon I will follow after you!”

So the fathers bade him farewell for the last time. St. Svimeon settled his affairs at the monastery, and in 1773 he reposed in peace, exactly one week after he had recovered from his deathly illness.

Thou didst dwell in the wilderness as an angel in the flesh and a wonderworker, O God-bearing Father Svimeon. Thou didst receive from heaven the virtues of fasting, watchfulness and prayer and didst heal the infirm in soul and body who hastened to thee. Glory to Him Who granted thee strength, glory to Him Who hath crowned thee, glory to Him Who worketh miracles through thee! 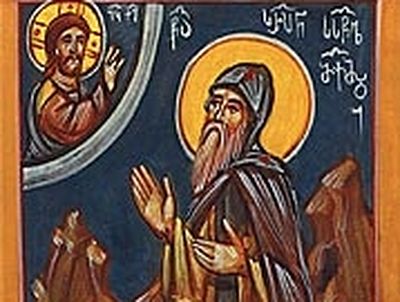 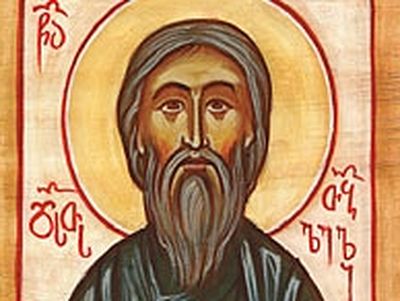 Holy Hieromartyr Dositeos of Tbilisi (†1795)
Archpriest Zakaria Machitadze
Thirty-five thousand Persian soldiers marched toward Georgia in the year 1795. The Georgian king Erekle II (1762–1798) and his two thousand soldiers declared war on the invaders as they were approaching Tbilisi. The Georgians won the first skirmish, but many perished in the fighting. The enemy was shaken and was preparing to flee the battleground, when several traitors reported to Aqa Muhammed Khan that King Erekle had lost nearly his entire army.
See also The Song of Simeon, the Presentation of Christ, and the Greek Old Testament
Gabe Martini

The Song of Simeon, the Presentation of Christ, and the Greek Old Testament
Gabe Martini
The Nunc dimittis or Song of Simeon is a recorded response as this old, frail servant of the Lord beholds the incarnate Lord of Glory for the very first time. In this moment, he knew his life was complete; he had fulfilled his purpose. Interestingly enough, there is a significant back-story to this presentation of Christ, and to the elder Simeon’s response.

Holy Hierarch Zosime of Kumurdo (16th century)
Archpriest Zakaria Machitadze
Saint Zosime of Kumurdo lived and labored from the endof the 15th century through the first half of the 16th century.To the world he was known as Zebede. He was raisedby Princess Ketevan, the daughter of King Giorgi VIII(1446–1466).
×