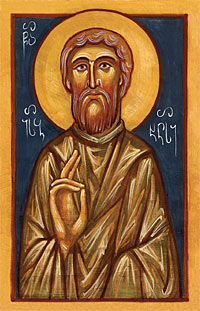 Little is known about the life of St. Ioseb of Khevi. The Church is certain only that he was a native of Khevi (in northern Georgia) and served as a priest in that village.

In addition to being great warriors, the people of Khevi have throughout history been remarkably steadfast in the Christian Faith. The churches and monasteries in Khevi are extraordinary in both beauty and inaccessibility. They were deliberately built in mountainous places, as if reaching them should demand the greatest of zeal.

The most important ornament and symbol of Khevi is the ice that perpetually caps the peak of Mt. Mqinvari (Kazbegi). On the slope of this mountain stands Trinity Monastery, where at one time St. Nino’s cross was preserved (it is presently kept in Tbilisi, in the northern section of the iconostasis at Sioni Cathedral).

Located above Trinity Monastery, on the ice-covered, vertical cliff of Mt. Mqinvari, is a cave hermitage at 13,450 feet, known as the Bethlehem Cave. It is possible to reach this hermitage only by climbing chains let down from its height. According to the chronicle Life of Kartli, this cave has throughout history been used to store sacred objects and treasures of the Church.

The historian Davit Batonishvili records that St. Ioseb was especially known for his love of holy objects, for keeping the strictest of fasts, and for his outstanding virtues. He climbed to the Bethlehem Hermitage and returned with a piece of the tent of the patriarch Abraham,[1] which he presented to King Erekle. Having attained the heights of clairvoyance and miracle-working, St. Ioseb reposed peacefully in the year 1763.

Thou art illumined by divine grace, O Holy Father Ioseb the Elder. Pray to Christ God on behalf of those who venerate thy holy name!

[1] Georgian tradition relates that both the tent of the Patriarch Abraham and the manger of Christ were kept in the Bethlehem Cave for many centuries. 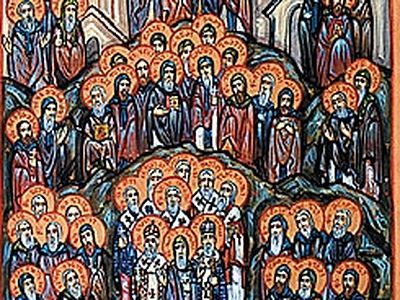 Venerable Fathers and Mothers of the Klarjeti Wilderness (8th–10th centuries)
Archpriest Zakaria Machitadze
For centuries the region of Tao-Klarjeti in southwestern Georgia was known for its holiness, unity and spiritual strength. The cultural life and faith of Kartli were nearly extinguished by the Arab-Muslim domination from the 8th to 10th centuries. Tao-Klarjeti, however, which had been emptied by a cholera epidemic and the aftermath of the Islamic invasions, filled with new churches and monasteries, becoming a destination for many Christian ascetics. 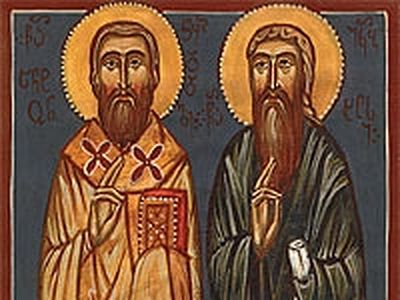 Holy Hierarch Anton of Chqondidi and His Disciple Hieromonk Iakob the Elder (18th–19th centuries)
Archpriest Zakaria Machitadze
Saint Anton of Chqondidi was born to the family of Otia Dadiani, the prince of Egrisi (now Samegrelo). Anton’s mother, Gulkan, was the daughter of the prince Shoshita III of Racha. There were six children in the family: five boys and one girl. Anton’s sister, Mariam, later married King Solomon the Great of Imereti.
See also Holy Catholicos-Patriarch Ioseb the Wonderworker (†1770)
Archpriest Zakaria Machitadze
Saint Ioseb (Jandierishvili) received his spiritual education at Davit-Gareji Monastery. He was endowed by the Lord with the gift of wonder-working. His prayers healed the terminally ill and demon-possessed. For his wisdom and virtue, he was consecrated bishop of Rustavi, and in 1755 enthroned as Catholicos-Patriarch. St. Ioseb remained a monk-ascetic in spite of his hierarchical rank. Holy Martyrs, the Brothers Isaak and Ioseb the Georgians (†808)
Archpriest Zakaria Machitadze
The holy martyrs Isaak and Ioseb the Georgians were born into a Muslim family, but their Georgian mother, a Christian, secretly raised them according to the Christian tradition. The brothers were so firmly dedicated to the Faith that they journeyed to Byzantium to request that Emperor Nicephorus I Phocas (802–811) permit them to settle in his capital. Venerable Abba Ioseb of Alaverdi (†570)
Archpriest Zakaria Machitadze
Blessed Abba Ioseb of Alaverdi was a disciple and companion of St. Ioane of Zedazeni, who in the 6th century arrived in Georgia with twelve Syrian ascetics to spread the Christian Faith.With the blessing of his teacher, Fr. Ioseb settled in the village of Alaverdi in eastern Georgia. According to tradition, he carried with him a cross formed from the wood of the Life-giving Cross of our Savior.
×