Bishop Demetrios of Mokissos, Chancellor of the Greek Orthodox Metropolis of Chicago, has been appointed to the Hate Crime Prosecution Council by Cook County State’s Attorney Anita Alvarez.

“I am honored and humbled by this appointment, I have witnessed the damage done by hate crimes against many in our communities,” said Bishop Demetrios. “I hope to create an atmosphere of understanding and security for victims of these crimes, in the hope that may come forward and justice can be served.”

Bishop Demetrios is deeply committed to these issues having served as a member of the Illinois State Advisory Committee of the United States Commission on Civil Rights (2008 to 2014) as well as past President (2008-2009) of the Council of Religious Leaders of Metropolitan Chicago. 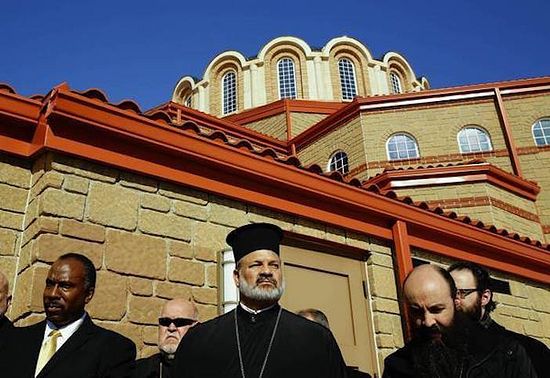 
He has been active for numerous years in councils and commissions related to social justice matters that pertain to Orthodox Christianity and its role in contemporary society. An early advocate for the abolition of the death penalty, Bishop Demetrios was instrumental in securing the abolition of capital punishment in Illinois and was invited by then Governor Patrick Quinn to sign the abolition.

The Hate Crime Prosecution Council serves as a link between the citizens of Cook County and the State’s Attorney Office. State’s Attorney Anita Alvarez formed the Hate Crime Prosecution Council to raise awareness and improve response to the issue of Hate Crimes in communities throughout Cook County. A chief focus of the council will be on creating and maintaining proactive partnerships with communities typically targeted by Hate Crimes in an effort to raise awareness and engagement.

Alvarez said the time is right to step up these efforts particularly as a result of international events involving acts of terrorism and the widespread use of social media and the potential for threats or intimidation on the internet. According to Alvarez, one of the greatest challenges that prosecutors face in the charging and prosecution of Hate Crimes is one of knowledge and understanding on the part of the public as well as victims. Hate Crimes often go unreported because victims fear public humiliation or retaliation if they come forward. A chief focus of the council will also be on creating and maintaining partnerships with communities typically targeted by Hate Crimes. Almost 2,000 children are reported for 'hate crimes' in Scotland
NEARLY 2,000 children in Scottish schools and nurseries were reported to their local education authority for "hate crimes" in the last three years, according to official statistics.
Comments
×