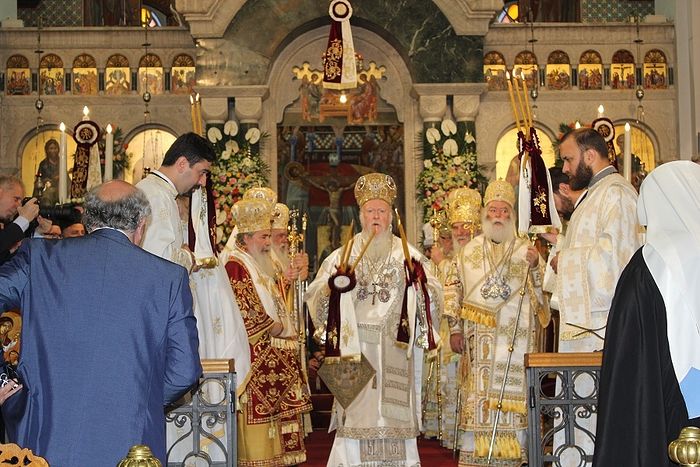 The Holy and Great Council of the Orthodox Church has commenced in Crete.

Ten of the fourteen Church Primates concelebrated the Divine Liturgy yesterday for the Sunday of Pentecost.

The following morning, Monday of the Holy Spirit, a Divine Liturgy — presided over by Patriarch Theophilos of Jerusalem — was celebrated in a monastery beside the Orthodox Academy of Crete where the Council has been convened.

The Divine Liturgy will be celebrated each morning during the Council, concluding with a second Synodal Divine Liturgy for the Sunday of All Saints (June 26th).

This sacramental, Eucharistic unity is the most important part of Orthodox worship and the glue that binds the fourteen Orthodox autocephalous (self-headed, or administered) churches into the One, Holy, Catholic, and Apostolic Church whose Founder and Head is Christ.

It was the issue of unity that every participating Primate focused on in their own way during the opening session of the Holy and Great Council.

As chair, Ecumenical Patriarch Bartholomew first addressed the Council and allotted much of his time to the issue of unity, highlighting three areas specifically: unity in the sacraments, the faith, and the canonical structure of the Church.

He also addressed critics of the Council, condemning those who characterized it as a “Robber” council before it had even began. The Orthodox faith, Bartholomew said, is protected by the synodal system, which defines the boundaries between the Church and heresy.

The Ecumenical Patriarch delivered his opening statement with resolute joy and cautioned that all Orthodox sister churches need to be vigilant that differences do not lead to divisions.

Patriarch Theodore of Alexandria followed Bartholomew as the second in order of honour and delivered a passionate plea beseeching his brother hierarchs to undertake the sacred work of the Council with a deep sense of obligation.

Each Primate addressed delegates with humility and an Orthodox ecclesiasticalphronema (mindset); a standout speech, however, marked by blunt and candid commentary, was delivered by Archbishop Chrysostomos of Cyprus.

He confronted “inter-Orthodox one-upmanship due to ethnophyletism,” argued that the state — and state interests — cannot be allowed to influence ecclesiastical affairs, and denounced the actions of some who have made the Orthodoxy seem “ridiculous.”

The Archbishop said that a main purpose of the Council is to create a framework for Church unity and in doing so “put forth the spiritual treasures of Orthodoxy” for the world to see.

Archbishop Ieronymos of Athens and All Greece, echoing Bartholomew’s sentiments on synodality, said that the expression of different opinions is suitable with conciliarity but that individual opinions should be rejected.

Archbishop Anastasios of Albania, taking the issue a bit further, addressed, in his opening remarks, those “little drops of poison” from some who wish to derail the work of the Holy and Great Council. He was one of a number of Primates who asserted that the Council in Crete is not a “copy and paste” of the Seven Ecumenical Councils, nor is it a “facsimile” of the councils in the West (e.g., Vatican II).

The Archbishop also criticized the need of unanimity, a system which was “unknown as a principle previously” and which has led to a number of recent trials, including the participation, or lack thereof, of the four absent churches (Antioch, Russia, Bulgaria, Georgia) and called for majority rule.

Finally, Anastasios remarked that the “Heresy of our time is egocentrism,” a sentiment shared - both directly and indirectly — by a number of Primates.

On the issue of unity, the youngest Primate, Archbishop Rastislav of Czech Lands and Slovakia, in his succinct yet insightful address, closed it by declaring that despite differences, including linguistic, “We are one Church.”

Each Primate, without exception, thanked and praised the Ecumenical Patriarch for his patience and perseverance in working towards and realizing the Holy and Great Council. Bartholomew remarked that pan-Orthodox unity has been his guiding star since being enthroned nearly 25 years ago, even confessing to the Council that his early efforts to call a Synaxis of Primates was resisted by some of his own bishops.

Imparted with a sense of brotherly love and unity by the concelebrated Divine Liturgies, the opening session of the Holy and Great Council has cultivated a constructive and positive environment; a number of participating hierarchs confirmed this to me privately following the session.

Of course, the hard work, deliberations, and decisions are still to come but the foundation has been set by the Primates that Orthodox unity and the need to address contemporary challenges is of utmost importance.

Moreover, this Council may not be the last — there was talk of gathering together every five or ten years depending on circumstances.

While much of the media attention has focused on the participatory withdrawal of some churches, especially Russia, the opening session showed that the Orthodox Church, as the entire body of faithful, is greater than anything earthly.

Metropolitan Sawa of Warsaw and All Poland summed up well what is needed this week from hierarchs: “A mind of Christ, not human wisdom.” Address for the Opening Session of the Holy and Great Council by His Beatitude Metropolitan Sawa of Warsaw and All Poland
Metropolitan Sawa of Warsaw and All Poland
The Orthodox Church in the contemporary world, full of disappointments and divisions, should be an example of love “not of this world”. It’s the Church that puts an end to human reasoning and facilitates the passage towards mutual understanding and unity. And this is exactly what everyone needs. Therefore we should rejoice at each manifestation. And this manifestation is the Holy and Great Council. What Does an Ecumenical Council Look Like?
Fr. Lawrence Farley

What Does an Ecumenical Council Look Like?
Fr. Lawrence Farley
The point here is that the Councils were not content merely to produce documents for people to read for their edification. They insisted that these truths be followed, and backed them up with anathemas, excommunicating those who dissented from them. The Holy and Great Council: Separating the Wheat from the Chaff
Evagelos Sotiropoulos

The Holy and Great Council: Separating the Wheat from the Chaff
Evagelos Sotiropoulos
The indispensable building block for Christian unity is in matters of faith. Do Orthodox Christians not pray, in every Divine Liturgy, for the unity of the faith and for the communion of the Holy Spirit? Unity of the faith gives birth to communion in the sacraments - including baptism, and at the Lord’s Table above all.
Comments

christina6/23/2016 1:50 pm
Note that the unity they are going for is Not of the same unity Christ spoke and prayed about. The unity of Christ is that all the true pious faithful of the church are of one mind and spirit ( In the truth of Christ and for Christ), and for the hearytics to REPEANT First of there errors/ sins ect, and then join the true church of the faithful in the unity with the TRUE confession of Christ and of the orthodox faith, unaltered untouched and un changed, spotless! This is the unity christ prayed for, Not the false one of the papists ect. This synod council in crete now is a False one ! full of many Lies, preverting the truth.Its the works of the devil the father of all lies and deceite!

Christina6/23/2016 12:50 pm
He just handed the church over (the institutional part of it with his own followers who are decieved yet some are willining for it) to the anti christ. But Thank God for the true faithful who uphold and defend/ fight against these enemies of God , because the true church will stand until the end of time!No matter what. As Christ promised us... Nothing shall prevail against us. The true church will be victorious in the end! Amen
×