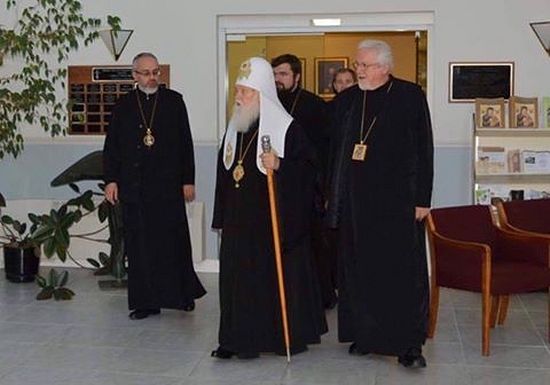 On November 7 pseudo-patriarch Philaret (Denisenko) from the “Kyiv Patriarchate” visited the spiritual center of the Ukrainian Orthodox Church in the USA (the Patriarchate of Constantinople) in South Bound Brook, New Jersey, reports the schismatic organization’s website.

According to information from the “Kyiv Patriarchate’s” website, Philaret (Denisenko) had a meeting with the head of the Ukrainian Orthodox Church in America Metropolitan Anthony of Hierapolis and Archbishop Daniel of Pamphilon, the ruling bishop of the UOC of the USA Western Diocese.

“In the course of the warm and amicable conversation the hierarchs discussed the issue of recognition of the Local Ukrainian Orthodox Church’s autocephaly by the Ecumenical Patriarchate,” the official website of the “Kyiv Patriarchate” reports. “The fellowship continued at dinner. The delegations exchanged presents to remember the meeting by.”

The following day, November 8, Denisenko met with the family of Markian Paslavsky – the only volunteer fighter from America who fought on the Ukrainian side and was killed in the Battle of Ilovaisk. He “defended Ukraine” in the volunteered Donbass Battalion. “Patriarch” Denisenko posthumously awarded Markian with the medal “For sacrifice and love for Ukraine.” He called on the killed soldier’s relatives not to grieve for him but to be proud of him because, in his view, Markian gave his life for his native country and is now in the Kingdom of Heaven.

Pseudo-patriarch Philaret says that Donbass should “atone for its sin by blood”
The head of the “Kyiv Patriarchate” organization, unrecognized in the Orthodox world, eighty-seven-year-old Philaret (Denisenko), has declared that Donbass residents must redeem by blood their guilt for the referendum on independence. His Holiness Patriarch Kirill: Unilateral recognition of schism in Ukraine will have catastrophic consequences for the unity of the Orthodox Church
His Holiness reminded the participants in the meeting that last year the hierarchs of the abovementioned entities, ignoring His Beatitude Metropolitan Onufry of Kiev and All Ukraine, the canonical Primate of the Ukrainian Orthodox Church, visited Ukraine on repeated occasions and openly spoke in support of schismatics, promising them the recognition of their structure as an autocephalous Church and claiming that they act on behalf of His Holiness Patriarch Bartholomew of Constantinople. Anthony11/11/2016 3:43 pm
I thought the Phanars reps in Kyiv had already ruled this out. Seems they speak with fork tongues. Quelle surprise!
×