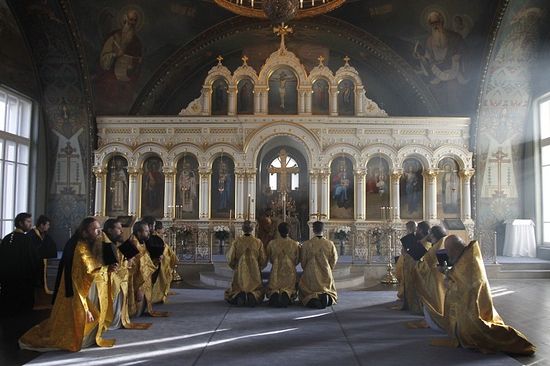 My first experience of Orthodoxy was, fittingly, also my first experience witnessing the Divine Liturgy, on the evening of Holy Thursday, April 1, 2010, at Holy Wisdom (St. Sophia) Greek Orthodox Cathedral a few blocks down Massachusetts Avenue from my university. My surroundings initially overwhelmed me—physically, emotionally, and spiritually.

I was no novice to beautiful religious buildings: I had been inside Notre Dame de Paris, la Basilica San Pietro in the Vatican, and more recently, in DC, the Episcopal National Cathedral and the Catholic Basilica of the National Shrine of the Immaculate Conception. An avid student of art history, I had “Googled” images of St. Paul’s in London, Westminster Abbey, Jerusalem’s Dome of the Rock and the Suleymaniye Mosque in Istanbul. I had seen many beautiful Gothic and Neo-Byzantine style churches, and worshipped in many other Catholic, Anglican, and some Protestant churches. I had also been in beautiful synagogues, mosques, and a Sikh temple.

Having seen these beautiful places, it is still difficult to put into words the extent to which experiencing the Holy Thursday Liturgy of St. Basil affected me over a year ago when I worshipped in Holy Wisdom Cathedral. I went with an ex-girlfriend, one of my closest friends, a Polish Roman Catholic: she never went back, but she saw how much the experience moved me. The whole liturgy—some three hours long—awakened in me an entirely new spiritual plane that nothing else had inspired in me before.

St. Sophia’s (referring to the sofia, or wisdom, of God, not a particular saint named Sophia) is a beautiful templon (the Greek word for church is identical to the ancient word for temple) constructed to look like a miniature model of the Hagia Sophia, the Church of the Holy Wisdom in Constantinople. For those unfamiliar with Byzantine history, this larger “Holy Wisdom” was the incredible sixth-century mother church of the Orthodox world and for centuries the world’s largest cathedral, famous for its crowning dome that endured many earthquakes. It was the liturgy in this church that inspired the conversion of the Rus. After the Ottoman Turks captured the city in 1453, it was preserved as a mosque, and today is one of Istanbul’s most frequently visited tourist attractions. Unfortunately, it has not been reopened as a place of worship: it is a museum. 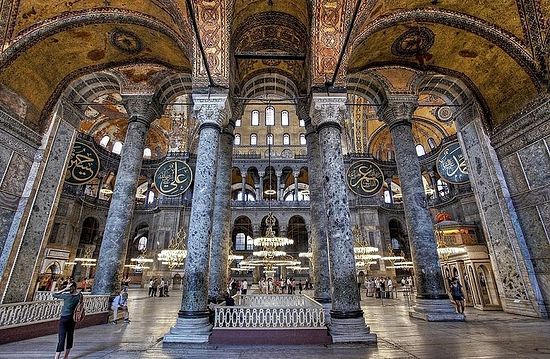 The smaller Hagia Sophia I visited that April day is similarly very beautiful: with its great dome and high-set windows, it is something altogether out of place in the shadow of the Neo-Gothic Episcopal National Cathedral two blocks away. Yet as with all churches, the true beauty of this temple lies within. To give readers unfamiliar with Orthodox church architecture a sense of how different the Byzantine style is from anything Western, I wish to give the following description:

Entering the cathedral’s unfinished narthex (it’s still white, as yet unpainted with the golden frescoes and saints’ images that dazzle the interior), one immediately notices icon stands in the corner: to your right is Christ, to the left His Mother, the Theotokos (Orthodox give her this title, meaning “bearer of God”, dating to the Third Ecumenical Council, since she chose to bear Christ, the New Adam, the Father’s Incarnate Son.) Every Orthodox church has a small open shop in the narthex/vestibule area where laypersons, often including the presvytera (Russian: matushka), the priest’s wife, sell candles, which the worshippers can light in front of the icons before entering the church. Some people bring their candles unlit into the church proper, and when venerating another icon will place the candle in front of a saint’s image.

Upon entering the church interior, your eyes will be dazzled by the vivid colors everywhere: rich gray and dark green marble columns support the soaring pendentives upon which the cathedral’s towering central dome rests. Everywhere above and around you, on the gold-painted ceiling and the less-adorned side walls around the windows, you will see Byzantine-style painted frescoes of saints. The large, high-set windows, with colored glass panes, are actually obstacles to seeing outside. The reason for this is so that the church community, or laos, is not distracted by the outside world during the liturgy and can focus wholly on worship in the cathedral.

Rising above the temple are the four Gospel writers, their inscriptions written in Greek, Matthew, Mark, Luke, and John, taking their places close to the dome. Above them, rising higher in circles, are exalted angels, the “cherubim and seraphim” of the Magnificat. At the top of the dome gazing down on His temple is the image of Christos Pantokrator—Christ enthroned as ruler of the universe. The Savior’s placement at the very top of the Cathedral reflects that the dome symbolizes heaven, and, indeed, just as with the great dome at the original sixth-century Hagia Sophia in Constantinople, the dome here seems to hover above the temple, perched delicately on the sturdy Corinthian columns.

You will notice as your eyes come back down to earth the pews—these are uncommon in most American Orthodox churches, an example of “latinizations” that have crept into certain Orthodox architecture over the years, especially in many American Greek churches. Pews are almost nonexistent in many European churches, where several rows of chairs are often placed along the side aisles for use by the elderly or small children. This is how it is at St. Nicholas.

Looking forward you will see that to the right on a slightly raised platform (this is not the altar) there is an elaborately carved chair. This is the thronos for the bishop (episkopos) when he visits the cathedral and presides over the Liturgy.

Unlike in Western Masses or services, Orthodox priests do not usually sit at all during the service. Like the congregation in most churches, they stand reverently before the altar, which symbolizes the throne of God. The Israelites of the first century worshiped liturgically in the Temple at Jerusalem, where a rotation of prescribed daily prayers were said and psalms chanted, and worship was always conducted with the congregants standing, as Christ implies when he speaks to his disciples in Mark 11:25:

At St. Sophia’s, the priests allow people to sit for parts of the liturgy and use the pews. To the left side of the church you will see several low tables or recessional apses. Here, certain icons will be kept, and confessions heard during orthros (the pre-liturgy morning rite.1)

The most visible object you will see is in the inner center of the church, a large partial wall made of columns that rise about a quarter of the way up between the floor and ceiling of the cathedral. Filling the space between the columns you will notice the painted frescoes of saints: to the immediate right of the golden doors is the chief icon of Christ, to the left, that of the Theotokos. The priest and deacons repeatedly cense these during the liturgy, along with other major icons as they process around the church. This large wall is the iconostasis; as you can tell from the name, it bears the church’s most important icons. The size and elaborateness of iconostasia vary depending on the size, wealth, and cultural roots of the church; St. Sophia’s is made of the marble that Greeks have used in architecture for centuries, while in most Russian churches fine wood and rich carvings are used. In front of the iconostasis are the choir stalls, small platforms from which the canters sing during the liturgy.

The iconostasis is identical in function to the wall and curtain that separated the Holy of Holies, the inner sanctum, of the Jewish Temple in Jerusalem from the main areas of the temple proper. As one progressed further into the temple, one tread on increasingly sacred ground, where, by varying degree, the people, elders, and finally most priests were restricted. While in ancient Jerusalem only the high priest could enter the Holy of Holies where the Tabernacle stood, in the Orthodox liturgy all clergy can pass through the doors (traditionally only priests or, when in attendance, the bishop, use the central Beautiful Gate, which also evokes the practice at the Jerusalem Temple.) The reason for this separation is not to prevent the people from seeing the altar, and depending on the local tradition, the Royal Doors might extend very high, or to eye level, or, in some cases, shoulder level, enabling the laity to see most of what goes on in the altar area even when the doors are closed. Traditionally, Russian iconostasia are of greater height than Greek ones.

This visual barrier encourages people to experience the Liturgy with their “spiritual eyes”, their hearts and their very souls. The icon wall and the Beautiful Gate serves to remind Orthodox worshipers that they are in a house of God, a holy temple evoking the memory of the ancient Temple at Jerusalem, which was the glory of Solomon and the heart of Israelite worship of the one God. Church tradition and Holy Scriptures maintain that St Joseph and the Blessed Virgin Mary found Jesus as a young boy teaching in the Temple, and the Theotokos served as one of the virgin weavers of the Holy of Holies curtains after her dedication to the Temple when she was a young girl. The Church commemorates Mary’s dedication to the Temple in her feast of the Entrance of the Theotokos into the Temple.

Another misconception about Orthodoxy and Orthodox worship is the tradition of the priest facing east, in the direction of the altar. This does not mean that “he turns his back to the people”, but that, actually, the priest faces the same direction as the people, leading them in prayer. This is how the Roman Catholic Church celebrated the Mass until the liturgical reforms enacted in the wake of the Second Vatican Council. Generally the altar and the priest’s activities within the sacred area are visible to the congregation throughout most of the service, with the Royal Doors being closed (and the curtain shut) only when the clergy finish preparing the Eucharist.

During the joyous Paschal celebration, for instance, the doors are opened—and left open—with great ceremony and thanksgiving, symbolizing Christ’s resurrection and that he is free of Death, over which he triumphed. Hence the triumphant words of the paschal midnight sticheron

“Christ is risen from the dead, trampling down Death by death, and among those in the tombs bestowing light!”

As with all things in Orthodoxy, the most important are inexorably related to the Divine Liturgy—thus after Easter Sunday, the faithful greet each other with cries of

“Christ is Risen!” (Response: “Indeed/Truly He is risen!”)

1 Orthos is also called by the Latin name, Matins.—O.C.
Previous Next
See also 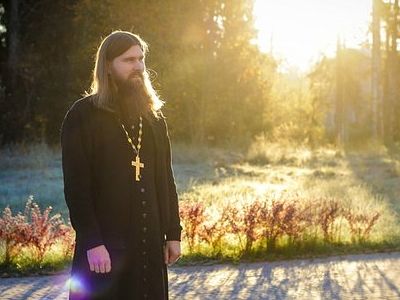 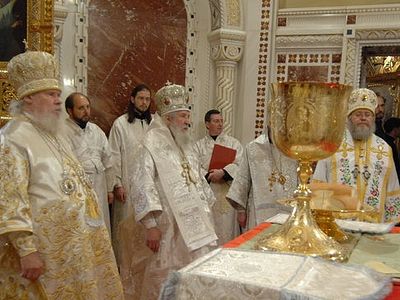