14,000 Infants (the Holy Innocents) slain by Herod at Bethlehem 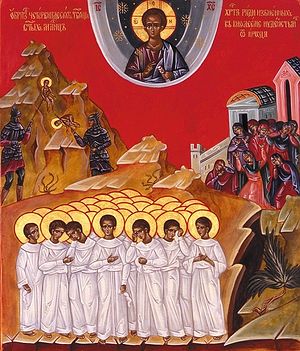 Photo: http://days.pravoslavie.ru/
14,000 Holy Infants were killed by King Herod in Bethlehem. When the time came for the Incarnation of the Son of God and His Birth of the Most Holy Virgin Mary, Magi in the East beheld a new star in the heavens, foretelling the Nativity of the King of the Jews. They journeyed immediately to Jerusalem to worship the Child, and the star showed them the way. Having worshipped the divine Infant, they did not return to Jerusalem to Herod, as he had ordered them, but being warned by God in a dream, they went back to their country by another way. Herod finally realized that his scheme to find the Child would not be successful, and he ordered that all the male children two years old and younger at Bethlehem and its surroundings be killed. He thought that the divine Infant, Whom he considered a rival, would be among the dead children.

The murdered infants thus became the first martyrs for Christ. The rage of Herod fell also on Simeon the God-Receiver (February 3), who declared before everyone in the Temple that the Messiah had been born. When the holy Elder died, Herod would not give permission for him to be properly buried. On the orders of King Herod, the holy prophet and priest Zachariah was also killed. He was murdered in Jerusalem between the Temple and the altar (Mt. 23:35) because he would not tell the whereabouts of his son John, the future Baptist of the Lord Jesus Christ.

The wrath of God soon fell upon Herod himself: a horrid condition struck him down and he died, eaten by worms while still alive. Before his death, the impious king murdered the chief priests and scribes of the Jews, and also his brother, and his sister and her husband, and also his own wife Mariam, and three of his sons, and seventy men of wisdom who were members of the Sanhedrin. He initiated this bloodbath so that the day of his death would not be one of rejoicing, but one of mourning.

As acceptable victims and freshly plucked flowers, / as divine first-fruits and newborn lambs, / you were offered to Christ who was born as a child, holy innocents. / You mocked Herod’s wickedness; / now we beseech you: / “Unceasingly pray for our souls.”

When the King was born in Bethlehem, the Magi came from the east. / Having been guided by the star on high, they brought Him gifts. / But in his exceeding wrath, Herod mowed down the infants as wheat; / lamenting that the rule of his kingdom had come to an end.