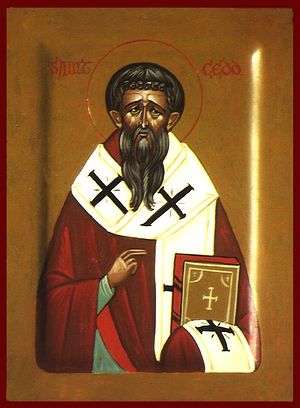 Saint Cedd was a missionary and bishop who spread the faith throughout England during the seventh century.

The eldest of four brothers, all of whom became priests, he was born in 620 AD into a noble Northumbrian family. At an early age, he began studies at the Lindisfarne Priory, where he became familiar with Irish monasticism. After pursuing further studies in Ireland, he was sent by Bishop Finan of Lindisfarne to evangelize the people of Essex. He baptized many of the locals, built several churches, and founded monasteries in Bradwell-on-Sea and East Tilbury.

After his consecration to the episcopacy as Bishop of Essex, he reinstated Saint Paul's in London as the main seat of his diocese. He remained fond of his northern homeland and made regular visits there. On one such occasion in 658, he was approached by King Aethelwald of Deira who, finding Saint Cedd to be a good and wise man, pressed him to accept a parcel of land at Lastingham in Yorkshire on which to build a monastery. Saint Cedd eventually agreed, laying the foundation stones after the parcel had been cleansed through prayer and fasting. He became the first Abbot of Lastingham and remained so while still ministering to his flock in Essex.

Saint Cedd died in Lastingham during a great plague that also claimed the life of his brother Cynebil. Eventually, he was buried under the altar of a little stone church built at Lastingham in honor of the Mother of God. His relics were later transferred to the Litchfield Cathedral, which had been built by his brother Chad.