Martyr Polyeuctus of Melitene, in Armenia 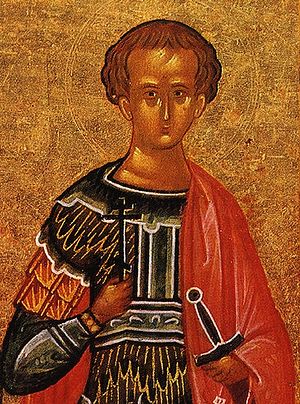 Saint Polyeuctus was the first martyr in the Armenian city of Meletine. He was a soldier under the emperor Decius (249-251) and he later suffered for Christ under the emperor Valerian (253-259). The saint was friend also of Nearchos, a fellow-soldier and firm Christian, but Polyeuctus, though he led a virtuous life, remained a pagan.

When the persecution against Christians began, Nearchos said to Polyeuctus, “Friend, we shall soon be separated, for they will take me to torture, and you alas, will renounce your friendship with me.” Polyeuctus told him that he had seen Christ in a dream, Who took his soiled military cloak from him and dressed him in a radiant garment. “Now,” he said, “I am prepared to serve the Lord Jesus Christ.”

Enflamed with zeal, Saint Polyeuctus went to the city square, and tore up the edict of Decius which required everyone to worship idols. A few moments later, he met a procession carrying twelve idols through the streets of the city. He dashed the idols to the ground and trampled them underfoot.

His father-in-law, the magistrate Felix, who was responsible for enforcing the imperial edict, was horrified at what Saint Polyeuctus had done and declared that he had to die for this. “Go, bid farewell to your wife and children,” said Felix. Paulina came and tearfully entreated her husband to renounce Christ. His father-in-law Felix also wept, but Saint Polyeuctus remained steadfast in his resolve to suffer for Christ.

With joy he bent his head beneath the sword of the executioner and was baptized in his own blood. Soon, when the Church of Christ in the reign of Saint Constantine had triumphed throughout all the Roman Empire, a church was built at Meletine in honor of the holy Martyr Polyeuctus. Many miracles were worked through the intercession of Saint Polyeuctus. In this very church the parents of Saint Euthymius the Great (January 20) prayed fervently for a son. The birth of this great luminary of Orthodoxy in the year 376 occurred through the help of the holy Martyr Polyeuctus.

Saint Polyeuctus was also venerated by Saint Acacius, Bishop of Meletine (March 31), a participant in the Third Ecumenical Council, and a great proponent of Orthodoxy. In the East, and also in the West, the holy Martyr Polyeuctus is venerated as a patron saint of vows and treaty agreements.

The Polyeucte Overture of French composer Paul Dukas is only one of many pieces of classical music inspired by the saints. It premiered in January of 1892. French dramatist Pierre Corneille has also written a play, Polyeucte (1642), based on the martyr’s life.

Your holy martyr Polyeuctus, O Lord, / through his suffering has received an incorruptible crown from You, our God. / For having Your strength, he laid low his adversaries, / and shattered the powerless boldness of demons. / Through his intercessions, save our souls!

When the Savior bowed his head in the Jordan, / the heads of the dragons were crushed; / when Polyeuctus was beheaded, the deceiver was put to shame.