St. Gregory the Bishop of Nyssa 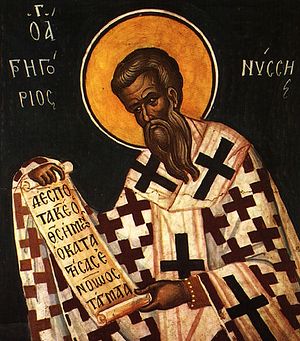 Saint Gregory, Bishop of Nyssa, was a younger brother of Saint Basil the Great (January 1). His birth and upbringing came at a time when the Arian disputes were at their height. Having received an excellent education, he was at one time a teacher of rhetoric. In the year 372, he was consecrated by Saint Basil the Great as bishop of the city of Nyssa in Cappadocia.

Saint Gregory was an ardent advocate for Orthodoxy, and he fought against the Arian heresy with his brother Saint Basil. Gregory was persecuted by the Arians, by whom he was falsely accused of improper use of church property, and thereby deprived of his See and sent to Ancyra.

In the following year Saint Gregory was again deposed in absentia by a council of Arian bishops, but he continued to encourage his flock in Orthodoxy, wandering about from place to place. After the death of the emperor Valens (378), Saint Gregory was restored to his cathedra and was joyously received by his flock. His brother Saint Basil the Great died in 379.

Only with difficulty did Saint Gregory survive the loss of his brother and guide. He delivered a funeral oration for him, and completed Saint Basil’s study of the six days of Creation, the Hexaemeron. That same year Saint Gregory participated in the Council of Antioch against heretics who refused to recognize the perpetual virginity of the Mother of God. Others at the opposite extreme, who worshipped the Mother of God as being God Herself, were also denounced by the Council. He visited the churches of Arabia and Palestine, which were infected with the Arian heresy, to assert the Orthodox teaching about the Most Holy Theotokos. On his return journey Saint Gregory visited Jerusalem and the Holy Places.

In the year 381 Saint Gregory was one of the chief figures of the Second Ecumenical Council, convened at Constantinople against the heresy of Macedonius, who incorrectly taught about the Holy Spirit. At this Council, on the initiative of Saint Gregory, the Nicean Symbol of Faith (the Creed) was completed.

Saint Gregory of Nyssa was a fiery defender of Orthodox dogmas and a zealous teacher of his flock, a kind and compassionate father to his spiritual children, and their intercessor before the courts. He was distinguished by his magnanimity, patience and love of peace.

Having reached old age, Saint Gregory of Nyssa died soon after the Council of Constantinople. Together with his great contemporaries, Saints Basil the Great and Gregory the Theologian, Saint Gregory of Nyssa had a significant influence on the Church life of his time. His sister, Saint Macrina, wrote to him: “You are renowned both in the cities, and gatherings of people, and throughout entire districts. Churches ask you for help.” Saint Gregory is known in history as one of the most profound Christian thinkers of the fourth century. Endowed with philosophical talent, he saw philosophy as a means for a deeper penetration into the authentic meaning of divine revelation.

Saint Gregory left behind many remarkable works of dogmatic character, as well as sermons and discourses. He has been called “the Father of Fathers.”

O God of our Fathers, / always act with kindness towards us; / take not Your mercy from us, / but guide our lives in peace / through the prayers of the hierarchs Gregory and Dometian.

In truth you were revealed to your flock as a rule of faith, / an image of humility and a teacher of abstinence; / your humility exalted you; / your poverty enriched you. / Hierarch Father Gregory, / entreat Christ our God / that our souls may be saved.

You kept watch with the eyes of your soul, holy bishop, / revealing yourself as a watchful pastor for the world. / With the staff of your wisdom and your fervent intercession, / you drove away all heretics like wolves. / You preserved your flock free from harm, most wise Gregory!