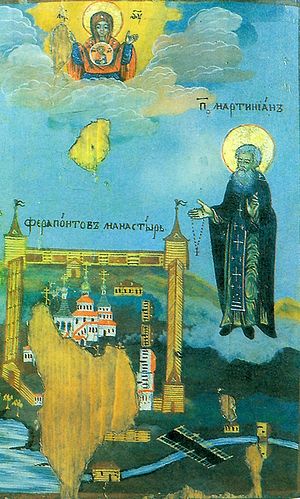 Saint Martinian of White Lake, in the world Michael, was born in the year 1370 in the village of Berezniko, not far from the Cyrilov monastery. At age thirteen he left his parents and went secretly to Saint Cyril of White Lake (June 9), whom many described as a great ascetic.

The young Martinian began zealously to imitate his teacher, with whom he dwelt in complete obedience. At the monastery he studied reading and writing, and with the blessing of Saint Cyril, he occupied himself with the copying of books. In time Martinian was ordained deacon and then hieromonk.

After the death of Saint Cyril (+ 1427), Martinian withdrew to a deserted island on Lake Vozha. Several monks gradually gathered around him. Saint Martinian established for them the church of the Transfiguration of the Lord and introduced a general Rule for the inhabitants. Yielding to the persistent requests of the brethren of Therapon monastery, he consented to become igumen of the monastery and brought it into an improved condition.

Saint Martinian gave spiritual support to Great Prince Basil in the difficulties of his time, when his first-cousin Demetrius Shemyaka illicitly sought the Moscow throne. He was always an advocate of truth and justice. Afterwards, upon the entreaty of the Great Prince, the saint accepted the governance of the monastery of Saint Sergius of Radonezh.

In 1455, Saint Martinian returned to the Therapon monastery. In his last years he was grievously ill and not able to walk, so the brethren carried him to church. He died at age 85. His relics were uncovered in the year 1514, and this event is celebrated on October 7.