Venerable Eupraxia of Tabenna, in Egypt 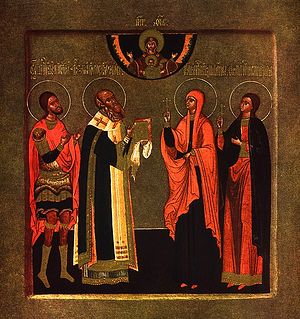 Saint Eupraxia the Elder was the mother of Saint Eupraxia, maiden of Tabennisi (July 25). She was the wife of the pious senator Antigonus, who was related to the emperor Theodosius the Great (379-395). Following the birth of their daughter, the couple decided to live from that time forward as brother and sister. They distributed alms to the poor, hoping to inherit the heavenly Kingdom.

After she was widowed, Saint Eupraxia devoted herself completely to the service of the Lord. After visiting several monastic establishments and bestowing liberal alms, she came to the Tabennisi monastery in Egypt, where the abbess was the nun Theodula, known for her strict rule.

Deeply moved by the pure way of monastic life, Saint Eupraxia came often to this monastery and always brought her eight-year-old daughter with her. The virtues and prayers of her parents bestowed a particular grace of God upon the child, who desired to dedicate herself to God. To her mother’s great joy, the abbess Theodula kept the younger Eupraxia at the convent and blessed her to receive monastic tonsure.

Saint Eupraxia the elder continued her works of charity, and increased her fasting and prayer. Abbess Theodula, possessing the gift of clairvoyance, told her of her impending end. Learning of her imminent death, Eupraxia gave thanks to the Lord for His great mercy towards her. She bid farewell to the sisters of the convent and to her daughter. She left her with these parting words: “Love the Lord Jesus Christ, and respect the sisters. Never dare to think that they are below you and should serve you. Be poor in your thoughts in order to profit by spiritual treasures. Also remember your father and me, and pray for the salvation of our souls.” After three days the saint surrendered her soul to the Lord (+ 393) and was buried at the monastery, where her daughter continued her ascetic struggles.