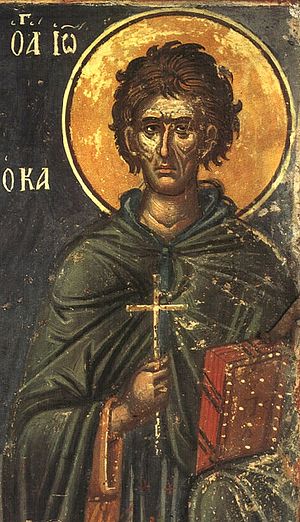 Saint John the Hut-Dweller was the son of rich and illustrious parents, and was born in Constantinople in the early fifth century. He received a fine education, and he mastered rhetoric and philosophy by the age of twelve. He also loved to read spiritual books. Perceiving the vanity of worldly life, he chose the path that was narrow and extremely difficult. Filled with longing to enter a monastery, he confided his intention to a passing monk. John made him promise to come back for him when he returned from his pilgrimage to Jerusalem, and take him to his monastery.

He asked his parents for a Gospel so that he might study the words of Christ. John’s parents hired a calligrapher to copy the text, and had the volume bound in a golden cover studded with gems. John read the Gospel constantly, delighting in the Savior’s words.

The monk kept his promise to come back for John, and they went secretly to Bithynia. At the monastery of the “Unsleeping” (Akoimitoi), he received monastic tonsure. The young monk began his ascetical labors with zeal, astonishing the brethren with his unceasing prayer, humble obedience, strict abstinence, and perseverance at work.

After six years, he began to undergo temptations. He remembered his parents, how much they loved him, and what sorrow he caused them. He regretted leaving them, and was filled with a burning desire to see them again.

Saint John explained his situation to the igumen Saint Marcellus (December 29) and he asked to be released from the monastery. He begged the igumen for his blessing and prayers to return home. He bid farewell to the brethren, hoping that by their prayers and with the help of God, he would both see his parents and overcome the snares of the devil. The igumen then blessed him for his journey.

Saint John returned to Constantinople, not to resume his former life of luxury, but dressed as a beggar, and unknown to anyone. He settled in a corner by the gates of his parents’ home. His father noticed the “pauper,” and began to send him food from his table, for the sake of Christ. John lived in a small hut for three years, oppressed and insulted by the servants, enduring cold and frost, unceasingly conversing with the Lord and the holy angels.

Before his death, the Lord appeared to the monk in a vision, revealing that the end of his sorrows was approaching, and that in three days he would be taken into the Heavenly Kingdom. Therefore, he asked the steward to give his mother a message to come to him, for he had something to say to her.

At first, she did not wish to go, but she was curious to know what this beggar had to say to her. Then he sent her another message, saying that he would die in three days. John thanked her for the charity he had received, and told her that God would reward her for it. He then made her promise to bury him beneath his hut, dressed in his rags. Only then did the saint give her his Gospel, which he always carried with him, saying, “May this console you in this life, and guide you to the next life.”

She showed the Gospel to her husband, saying that it was similar to the one they had given their son. He realized that it was, in fact, the very Gospel they had commissioned for John. They went back to the gates, intending to ask the pauper where he got the Gospel, and if he knew anything about their son. Unable to restrain himself any longer, he admitted that he was their child. With tears of joy they embraced him, weeping because he had endured privation for so long at the very gates of his parental home.

The saint died in the mid-fifth century, when he was not quite twenty-five years old. On the place of his burial the parents built a church, and beside it a hostel for strangers. When they died, they were buried in the church they had built.

In the twelfth century the head of the saint was taken by Crusaders to Besançon (in France), and other relics of the saint were taken to Rome.

From your early youth, / you longed with fervor for the things of the Lord. / Leaving the world and its pleasures, / you became an example of monastic life. / Most blessed John, you built your hut at the door of your parents’ house and overcame the devil’s guiles. / Therefore Christ Himself has worthily glorified you.

Longing for poverty in imitation of Christ, / you abandoned your parents’ wealth, wise Father John; / grasping the Gospel in your hands, / you followed Christ God, unceasingly praying for us all.