St. Cyril the Archbishop of Alexandria 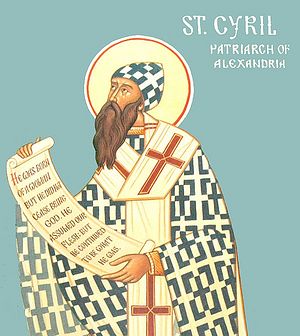 Saints Athanasius and Cyril were Archbishops of Alexandria. These wise teachers of truth and defenders of Christ’s Church share a joint Feast in recognition of their dogmatic writings which affirm the truth of the Orthodox Faith, correctly interpret the Holy Scripture, and censure the delusions of the heretics.

St Cyril was the nephew of Patriarch Theophilus of Alexandria, who educated him from his youth. He succeeded to his uncle’s position in 412, but was deposed through the intrigues of the Nestorian heretics. He later resumed his See, however.

St Cyril presided at the Third Ecumenical Council in 431, which censured the Nestorian blasphemy against the Most Holy Theotokos. His wise words demonstrated the error of their false doctrine.

St Cyril departed to the Lord in the year 444, and is also commemorated on June 9 (the day of his repose).