St. Anthony the Founder of Monasticism in Georgia 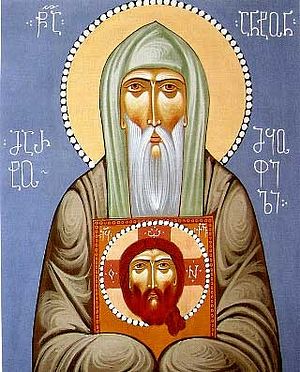 Photo: http://days.pravoslavie.ru/
Our holy father Anton of Martqopi arrived in Georgia in the 6th century with the rest of the Thirteen Syrian Fathers and settled in Kakheti to preach the Gospel of Christ. He always carried with him an icon of the Savior “Not-Made-By-Hands.” Anton made his home in the wilderness, and deer visited him every evening to nourish him with their milk.

One day the deer arrived earlier than expected, and they were followed by a wounded fawn. Clearly something had frightened them.

When Anton retraced the animals’ path, he discovered a nobleman, the head of a nearby village, hunting in the fields. Astonished to see the old monk with his icon, standing amidst a gathering of deer, the nobleman, being a pagan, became convinced that he was dangerous and ordered his servants to take him to a smith and chop off his hands.

Anton was led at once to the smith, but when the craftsman heated his sword and drew it above the monk’s hands in preparation, he fell down suddenly and his arms became like wood. 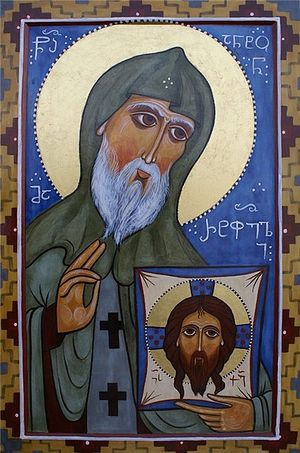 Photo: http://days.pravoslavie.ru/
The daunted smith fell mute, but blessed Anton made the sign of the Cross over him and he was immediately healed.

Having heard about this miracle, the nobleman perceived that Abba Anton was truly holy, and he began to hold him in reverence. “Tell me what you need, and I will provide it for you,” he told Elder Anton. The monk requested a single piece of salt, and they brought him two large blocks. He broke off a small piece and placed it near his cell for the deer.

After the incident at the smith’s, many people began to visit Anton, and the holy father constructed a monastery for the faithful.

But before long their attention became burdensome, and Elder Anton fled from the world to the peak of a mountain. There he began to preach from the top of a pillar, where he would remain the last fifteen years of his life.

When God revealed to Fr. Anton the day of his repose, the monk-stylite gathered his pupils, imparted to them a few last words of wisdom, blessed them, and died on his knees in front of his beloved icon.

St. Anton’s body was taken down from the pillar and buried in the monastery that he had founded, before the icon of the Theotokos.