Apostle Timothy of the Seventy 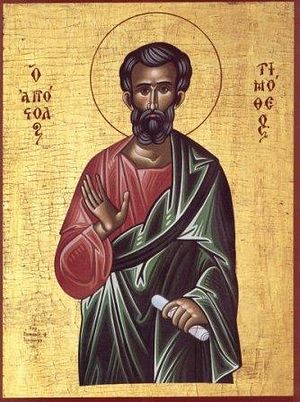 Photo: http://days.pravoslavie.ru/
The Holy Apostle Timothy was from the Lycaonian city of Lystra in Asia Minor. Saint Timothy was converted to Christ in the year 52 by the holy Apostle Paul (June 29). When the Apostles Paul and Barnabas first visited the cities of Lycaonia, Saint Paul healed one crippled from birth. Many of the inhabitants of Lystra then believed in Christ, and among them was the future Saint Timothy, his mother Eunice and grandmother Loida (Lois) (Acts 14:6-12; 2 Tim. 1:5).

The seed of faith, planted in Saint Timothy’s soul by the Apostle Paul, brought forth abundant fruit. He became Saint Paul’s disciple, and later his constant companion and co-worker in the preaching of the Gospel. The Apostle Paul loved Saint Timothy and in his Epistles called him his beloved son, remembering his devotion and fidelity with gratitude.

He wrote to Timothy: “You have followed my teaching, way of life, purpose, faith, longsuffering, love, and patience” (2 Tim. 3:10-11). The Apostle Paul appointed Saint Timothy as Bishop of Ephesus, where the saint remained for fifteen years. Finally, when Saint Paul was in prison and awaiting martyrdom, he summoned his faithful friend, Saint Timothy, for a last farewell (2 Tim. 4:9).

Saint Timothy ended his life as a martyr. The pagans of Ephesus celebrated a festival in honor of their idols, and used to carry them through the city, accompanied by impious ceremonies and songs. Saint Timothy, zealous for the glory of God, attempted to halt the procession and reason with the spiritually blind idol-worshipping people, by preaching the true faith in Christ.

The pagans angrily fell upon the holy apostle, they beat him, dragged him along the ground, and finally, they stoned him. Saint Timothy’s martyrdom occurred in the year 93.

In the fourth century the holy relics of Saint Timothy were transferred to Constantinople and placed in the church of the Holy Apostles near the tombs of Saint Andrew (November 30) and Saint Luke (October 18). The Church honors Saint Timothy as one of the Apostles of the Seventy.

In Russian practice, the back of a priest’s cross is often inscribed with Saint Paul’s words to Saint Timothy: “Be an example to the believers in speech and conduct, in love, in faith, in purity” (1 Tim. 4:12).

Having learned goodness and maintaining continence in all things, / you were arrayed with a good conscience as befits a priest. / From the chosen Vessel you drew ineffable mysteries; / you kept the faith, and finished a course equal to His. / Bishop martyr Timothy, entreat Christ God that our souls may be saved.

Let us the faithful praise the Holy Apostle Timothy, / the companion of Paul in his travels and together with him / let us honor the wise Anastasius, who came as a star from Persia / for the healing of the passions of our souls and the diseases of our bodies.