Venerable Anatole I of Optina 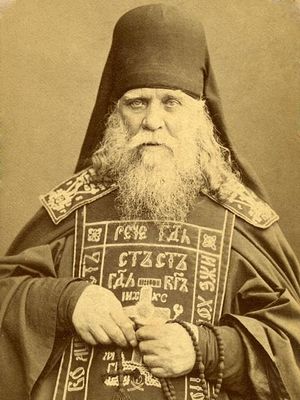 Photo; http://www.optina.ru/
Saint Anatole (Zertsalov) was born in the village of Bobolya on March 24, 1824. His father, Moses Kopev, was a deacon, and his mother’s name was Anna. The parents were exceptionally devout Christians who hoped that their children would enter the monastic life.

Their only son Alexis was taught to read from the age of five. He was studied at the Saint Boris Theological Seminary, then later he entered the seminary at Kaluga. When he was fourteen, Alexis was stricken with a fever which kept him out of school for a year.

From a very early age, Alexis wanted to become a monk. He even thought about going to the Roslavl forests to live with the hermits at that place. His plans were not fulfilled, however, because a thunderstorm prevented him from continuing on his way. He decided to turn back, regarding the storm as a sign that God did not wish him to proceed on his journey.

The young man returned to seminary, where he was renamed Alexis M. Zertsalov. Sometimes students at Russian seminaries were given new names, as was the case with Saint Innocent Veniaminov (March 31).

After being healed of tuberculosis, he arrived at Optina Monastery with his mother. Saint Macarius (September 7) praised her for setting her son on such a good path. The Elder took Alexis under his wing, instructing him in the Jesus Prayer, and in the principles of the spiritual life. When Father Macarius was too busy, he blessed Alexis to seek advice from Father Ambrose or Father Anthony.

Alexis fulfilled various obediences in the monastery, beginning in the kitchen. He did not get much sleep, and then only on the wood pile. He was frequently transferred from cell to cell, and he experienced many sorrows and trials. These difficulties taught him the virtues of humility and patience.

Saint Ignatius Brianchaninov (April 30) once visited Optina hoping to meet and converse with monks experienced in the spiritual life, and was referred to Father Anatole, who was then a deacon. The bishop was impressed with Father Anatole, and related the details of their conversation to Father Macarius. The Elder began to beat him with his staff, and ordered him out of the room. When someone asked why he had been so harsh, Father Macarius said, “Why shouldn’t I scold him? It’s easy to become proud.” 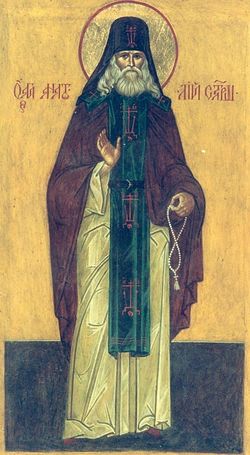 Father Ambrose’s cell was to the right of the doors to the Skete, while that of Father Anatole was to the left. Visitors to one often went to see the other, as well. In addition to receiving visitors, Father Anatole maintained a correspondence with many people who relied on his advice.

Father Ambrose, because of his illness, relied greatly on Father Anatole in ordering life at the Shamordino Convent. He told the nuns that he rarely visited them because of his confidence in Father Anatole. Father Ambrose called him a great practicioner of the Jesus Prayer, who had received grace and the gift of unceasing prayer. Only one in a thousand received such grace, he informed the nuns.

Near the end of his life, Father Anatole had atained the same spiritual wisdom, discernment, and clairvoyance possessed by Father Macarius and Father Ambrose. He saw the secrets of the human soul, and was able to foretell future events.

After Father Ambrose’s repose in 1891, the bishop (who did not approve of Father Ambrose) forbade Father Anatole to visit Shamordino. This caused him deep sorrow, which affected his health. He traveled to Saint Petersburg in 1892 and met with Saint John of Kronstadt (December 20). On October 10, the anniversary of Father Ambrose’s death, they served together. Doctors in the capital examined him and found that his heart and lungs were not good.

Father Anatole’s health grew worse during 1893, and on October 10, he was secretly tonsured into the Great Schema.

Saint Anatole fell asleep in the Lord on January 25, 1894, and was buried near his beloved instructors Saint Ambrose and Saint Macarius.

The Moscow Patriarchate authorized local veneration of the Optina Elders on June 13,1996. The work of uncovering the relics of Saints Leonid, Macarius, Hilarion, Ambrose, Anatole I, Barsanuphius and Anatole II began on June 24/July 7, 1998 and was concluded the next day. However, because of the church Feasts (Nativity of Saint John the Baptist, etc.) associated with the actual dates of the uncovering of the relics, Patriarch Alexey II designated June 27/July 10 as the date for commemorating this event. The relics of the holy Elders now rest in the new church of the Vladimir Icon of the Mother of God.

The Holy Elders of Optina
Commemoration October 11/24
Through God's mercy, in spite of seventy years of Communist enslavement, "prima vitae" of many of the Elders have been preserved. Written by their immediate disciples, these rare biographies contain a multitude of priceless details and anecdotes that shed light into the secret corners of lives totally dedicated to Jesus Christ. Synaxis of the Saints of Optina
Commemorated October 11/24

Synaxis of the Saints of Optina
Commemorated October 11/24
Although the beginning of monastic life in Optina monastery dates to at least as early as the sixteenth century, it is most known for its tradition of spiritual eldership in the tradition of St. Paisius (Velichkovsky) of Moldavia, which flourished there in the nineteenth century—particularly in the monastery’s Skete of St. John the Forerunner. This pleiad of spiritual luminaries bears a significance to Russian Orthodox spirituality that cannot be overestimated.
×