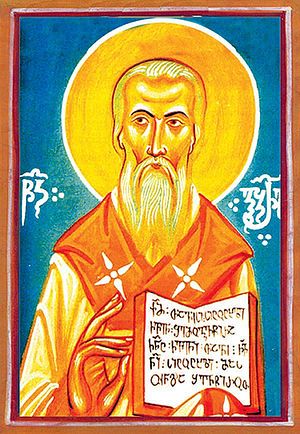 Bishop Gabriel (Kikodze) was born November 15, 1825, in the village of Bachvi, in the western Georgian district of Ozurgeti in Guria. His father was the priest Maxime Kikodze.

From 1840 to 1845, Gabriel (Gerasime in the world) studied in Tbilisi and at the theological seminaries in Pskov and Saint Petersburg. In 1849, he graduated from the Saint Petersburg Theological Academy with a master’s degree, and in the same year he was married and returned to Georgia. Upon his return he was appointed dean of Tbilisi Seminary. In 1854 Saint Gabriel was ordained a deacon, and later a priest.

In 1856 a terrible grief befell Saint Gabriel: his wife and five children died during an epidemic that swept through the capital. After this tragedy Saint Gabriel received a blessing from the exarch Isidore to be tonsured a monk at Davit-Gareji Monastery, and in 1858 he was enthroned as abbot of this monastery. In the same year he was consecrated bishop of Gori, and then on July 2, 1860, he was transferred to the Imereti region. He shepherded the flock of this diocese to the end of his life. In 1869 the Abkhazeti diocese was also brought under his leadership. Saint Gabriel strove tirelessly to strengthen the faith of his flock, and to this end he traveled constantly throughout the villages, preaching and helping those in need. In the end it was his own character and example that proved to have the most powerful influence on his spiritual children.

There existed no differentiation among petitioners in the eyes of Bishop Gabriel: old or young, prince or pauper, relative, acquaintance or stranger—all were equal to him and equally deserving of his help, support, and protection. He would not tolerate lawlessness or immorality.

The simplicity of his character was evident even in his clothing, his dwelling, and the food he ate. It was not unusual for visitors, seeing the elder clad in a shabby monk’s robe, to take him for a servant. Bishop Gabriel was a merciful almsgiver and generously distributed aid to the widows and orphans in his community.

He sympathized deeply with the struggles of simple people and sought to establish a system of universal primary education. He offered his help to many young people by providing them with shelter and by often funding their studies. He would host dinners for the youth, leading long discussions to instill in them virtuous thoughts and to cultivate a love of humility in their young souls. Bishop Gabriel lived by the axiom: “Nothing is my own; all belongs to God.”

We know from Bishop Gabriel’s diaries the number of beggars he buried, the naked he clothed, the people for whom he paved the way to survival, the students for whom he created an opportunity for study, and the sick for whom he purchased medicine. Often in the winter Saint Gabriel would anonymously send firewood and money to families that were suffering from hunger and cold.

Despite all of this, Bishop Gabriel would receive letters accusing him of unrighteousness, injustice, immorality, ambition, and the selling of Church property without permission.

Bishop Gabriel’s strong nationalist sentiments (especially those pertaining to the Georgian language) often caused conflicts with the Russian exarch Evsevi. For this reason Bishop Gabriel became entangled in the politics of Georgian-Russian relations and he was held in high suspicion by officials of the Russian rule in Georgia. Bishop Gabriel began to be regarded as “untrustworthy” by his own government, and the officials assigned spies to watch over his every action.

In 1885 Bishop Gabriel’s secretary, the publicist Evstati Mchedlidze (Bosleveli), was killed. The bishop himself began to receive threatening letters, and he decided to leave Georgia. “My spiritual weakness was such that I became frightened,” he wrote in his memoirs. “It was not only for myself that I was afraid, seeing how I had already grown old and had little time remaining in the world. Rather, if they had killed me, a great disgrace would have fallen on the nation that had devoted itself so faithfully to its shepherd.”

But Bishop Gabriel never left Georgia. In his last years he began to suffer severe inner torment, and he often saw terrible visions—the enemy of mankind launched a final campaign to spiritually defeat the already physically weakened elder. Bishop Gabriel ceaselessly repeated the prayer “God be merciful to me, a sinner.”

Breathing his last, he prayed, “Remember me, O Lord, when Thou comest in Thy Kingdom!”

Bishop Gabriel reposed in Kutaisi on January 25, 1896. The winter was unusually harsh in western Georgia that year. The roads were covered with snow, and it was impossible to translate his holy relics from Kutaisi to nearby Gelati. The people waited for more agreeable weather, and until it arrived Bishop Gabriel’s relics remained at the City Cathedral in Kutaisi (this cathedral was destroyed during the Communist period).

For forty-six days all of Georgia mourned Bishop Gabriel’s passing, and during that time his body showed no signs of decay. In accordance with his will, the hierarch’s personal possessions were distributed to widows, orphans, and the poor. His parting address, in which he remitted the sins of all his flock and asked for the forgiveness of his own sins, was published as a final, enduring testament to his great faith.