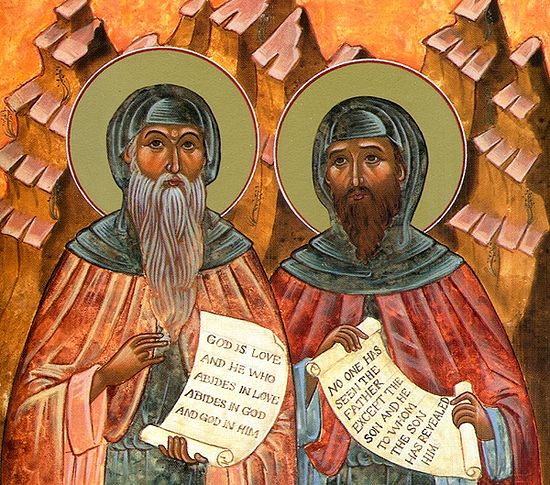 Saints Barsanuphius the Great and John the Prophet lived during the sixth century during the reign of the emperor Justinian I (483-565). They lived in asceticism at the monastery of Abba Seridus in Palestine, near the city of Gaza.

Saint Barsanuphius was born in Egypt (the year of his birth is unknown). From his youth, he began to lead an ascetic life. Arriving at the cenobitic monastery of Abba Seridus, he built a small cell outside the monastery. Here he lived in solitude.

Later, Saint John, disciple of Saint Barsanuphius, lived in this cell for eighteen years until his death. Saint John imitated his teacher in silence, ascetic deeds and in virtue. Because of his gift of clairvoyance, he was known as “the Prophet.”

After a certain time, Saint Barsanuphius built another cell near the monastery. At the beginning of his solitude, the monastery sent him only three loaves of bread per week. He dwelt for fifty years in work and ascetic deeds.

When Patriarch Eustochios of Jerusalem heard about the ascetical life of Saint Barsanuphius, it seemed unbelievable to him. He wanted to see Barsanuphius for himself, so he and his companions tried to dig under the wall, and to enter the monk’s cell from beneath. Those attempting to enter were almost burned by flames suddenly bursting forth from the cell.

In his hermitage Saint Barsanuphius devoted himeself entirely to prayer, and he attained a high degree of spiritual perfection. We have manuscript accounts about the life, the deeds and talents of Saints Barsanuphius and John. During the lifetime of Saint Paisius Velichkovsky (November 15), they were translated into the Moldavian and Slavonic languages. The publication of these manuscripts, and also their translation into the Russian language, was done in the nineteenth century by the Elders of Optina’s Entry of the Theotokos Monastery.

The precepts of Saints Barsanuphius and John clearly show the degree of their moral perfection, and their love for people, but contain scant facts about their lives. We do not know exactly when Saint Barsanuphius died. Some sources say the year of his death was 563, others say more cautiously before the year 600.

After spending a long time in seclusion, Saint Barsanuphius thereafter and until the death of Saint John the Prophet began to serve others by instructing them on the path to salvation, as Abba Dorotheus (June 5) testifies. Saint Barsanuphius replied to questioners through Saint John, sometimes instructing him to give the answers, or even through Abba Seridus (August 13), who wrote down the saint’s answers.

In the answers of Saints Barsanuphius and John the Prophet, who were guides in the spiritual life not only for their contemporaries, but also for succeeding generations, it is clearly possible to see the monks’ gradual spiritual ascent “from strength to strength.”

By deeds of fasting, silence, guarding the heart, and unceasing prayer, Saint Barsanuphius attained the heights of humility, reasoning and fiery love. The Lord gave him the gifts of discernment, clairvoyance, and wonderworking. By the power of his prayers, he was able to free the souls of people from sins. Sometimes, he took the sins of others upon himself.

The venerable one knew the dispositions of hearts, therefore he gave advice according to the spiritual state of each person. In the Name of the Lord he raised the dead, he cast out demons, and healed incurable illnesses. Things that he blessed received divine power and grace (for example, kukol or furrow-weed took away a monk’s headache). Even the name of Abba Barsanuphius, when invoked mentally, gave help to those who called upon it.

Through the prayers of Saint Barsanuphius, God sent rain upon the earth, withdrawing His wrath from the multitudes of the people. The saint’s predictions always came true. Thus, he predicted that a certain monk, the Elder Euthymius the Silent, would be placed with him in a single grave, which indeed came to pass.Saint Barsanuphius acquired these gifts after many years of patiently enduring great temptations and illness.

Besides the Orthodox ascetic Barsanuphius the Great, there was another Barsanuphius, a Monophysite heretic. Sophronius, Patriarch of Jerusalem, anathematized him in his “Confession of Faith,” sent to the Sixth Ecumenical Council).

We do not know when Saint Barsanuphius arrived at the monastery of Abba Seridus, nor anything about the home and family of Saint John the Prophet. Following the instructions of Saint Barsanuphius, John attained the heights of perfection, and became like his teacher in all things. Out of humility, he sent those who came to him with questions to Abba Barsanuphius.

Saint John foresaw and predicted many things, even his own death a week after the death of Abba Seridus. Abba Elian, the young igumen of this monastery, begged John to remain with him for two more weeks, in order to teach him the Rule and how to govern the monastery. Saint John fulfilled his request and died after two weeks.

Saint Barsanuphius the Great survived his disciple and friend, but embraced complete silence and refused to give answers to anyone. These two ascetics have left the soul-profiting book, GUIDANCE TOWARD SPIRITUAL LIFE: ANSWERS TO THE QUESTIONS OF DISCIPLES by the Holy Monastic Fathers Barsanuphius and John as their spiritual legacy. This book was known to many saints who lived at a later time, as evidenced by the wrings of Saint Theodore the Studite (November 11 and January 26), the hieromonk Nikon Chernogorets (+ 1060), Saint Simeon the New Theologian (March 12), and other Orthodox ascetics and writers.