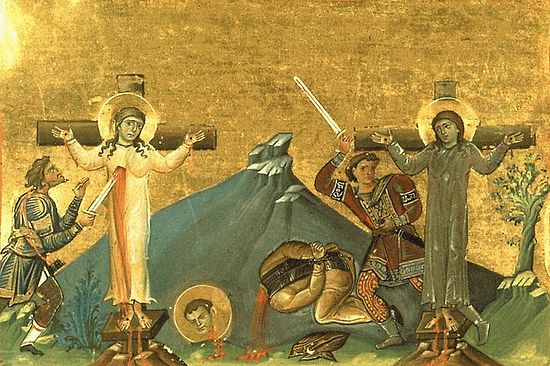 The Holy Virgin Martyrs Martha and Mary were sisters who lived in Asia Minor, and fervently desired to suffer for the Lord Jesus Christ. Once, a pagan military commander marched past their house. The sisters went out to him and loudly declared that they were Christians. At first the commander paid no attention to them, but they persistently shouted after him, repeating their confession.

They were arrested together with their brother Lykarion. All three were crucified, and during the execution their mother came to them, encouraging them in their sufferings for Christ. The sisters were pierced with spears, and Lykarion was beheaded by the sword.

Your lamb Martha, calls out to You, O Jesus, in a loud voice: / “I love You, my Bridegroom, and in seeking You I endure suffering. / In baptism I was crucified so that I might reign in You, and I died so that I might live with You. / Accept me as a pure sacrifice, / for I have offered offered myself in love.” / Through her prayers save our souls, since You are merciful.