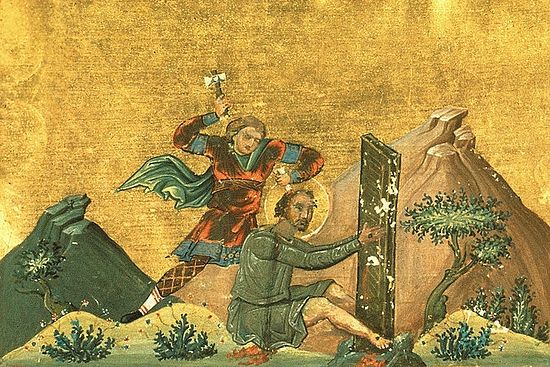 The Holy Martyr Julian was a native of the Phoenician city of Emesa, and he suffered in the year 312 under the emperor Maximian. He was a skilled physician, and healed illnesses not only of the body but also of the soul, and he converted many people to faith in Christ the Savior.

When they led away the holy Martyrs Bishop Silvanus, Deacon Luke and the Reader Mocius (February 29) to be eaten by wild beasts, Julian encouraged them and urged them not to fear death for the Lord. He was also arrested and put to death. His head, hands and feet were pierced with long nails.

Your holy martyr Julian, O Lord, / through his suffering has received an incorruptible crown from You, our God. / For having Your strength, he laid low his adversaries, / and shattered the powerless boldness of demons. / Through his intercessions, save our souls!