St. Arsenius of Iqalto in Georgia 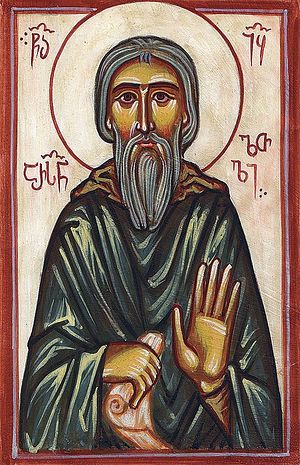 Saint Arsen of Iqalto was a translator, researcher, compiler of manuscripts, hymnographer, philosopher, and a great defender of the Georgian Christian Faith. His father was Ibadi Vachnadze, a wise, learned man and a fluent speaker of the Greek language. He directed the academy at Iqalto Monastery and was an instructor of Holy King Davit the Restorer.

Few details about the life of Saint Arsen have been preserved, but we know that he lived in the 11th and 12th centuries and was a younger contemporary of Saint Eprem the Lesser. He received both his primary and higher education in Byzantium, at Mangana Monastery, which had been founded by the Byzantine emperor Constantine IX Monomachus (1042-1055). At the academy he completed one of his most important projects: a translation of the Byzantine historian George Hamartolus’ Chronicle. Hamartolus’ work is a nine-volume account of history from Adam to the year A.D. 842. Also at Mangana, Arsen translated a volume of dogmatic-polemical writings into Georgian and called his work Dogmatikon. In the years that followed, works translated by other authors were added to the book.

After completing his studies at Mangana Monastery, Arsen moved to the Black Mountains near Antioch to continue his labors under the guidance of Saint Eprem the Lesser. Following Saint Eprem’s repose, he returned to Mangana Monastery to continue his translations. In 1114 King Davit the Restorer summoned Arsen back to Georgia, to the Gelati Academy in the west. It was there that he translated The Nomocanon (a Byzantine collection of ecclesiastical law.) from the original Greek into Georgian. Arsen later returned to Kakheti in eastern Georgia, where he founded an academy at Iqalto Monastery. He also participated in the Council of Ruisi-Urbnisi, which had been convened by King Davit the Restorer. One of King Davit’s biographers writes that he invited “Arsen of Iqalto, translator and interpreter of the Greek and Georgian languages and enlightener of many churches.”

Arsen was present at the repose of King Davit the Restorer, and it is believed that he composed the king’s epitaph:

I fed seven kings with my wealth,
Drove the Turks, Persians, and Arabs from our borders,
Moved the fish from one river to another,
And, having accomplished all these things,
Lay my hands upon my heart to die.

The “theologian, philosopher, physicist, anatomist, writer of allegories and verses, epic poet, and compiler of Church typika” Arsen was buried in Iqalto next to Saint Zenon, the founder of Iqalto Monastery.