Synaxis of the Hierarchs of Novgorod, Buried in the Cathedral of the Holy Wisdom (Hagia Sophia) in Novgorod 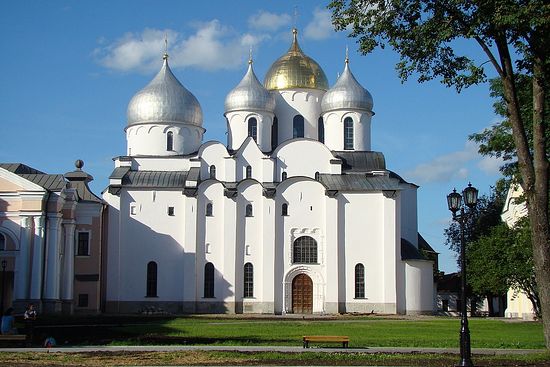 The Synaxis of Novgorod Hierarchs is also celebrated on October 4 and on the third Sunday after Pentecost. On October 4, 1439 Saint John (September 7) appeared to the presiding hierarch Saint Euthymius (March 11) and ordered him to serve a special panikhida in memory of those buried at the Sophia cathedral (the Russian princes and Archbishops of Novgorod, and all Orthodox Christians) on the Feast of the Hieromartyr Hierotheus, first Bishop of Athens.

Then the incorrupt relics of Saint John (September 7) were uncovered. Afterwards, the Synaxis was established to mark the glorification of the Novgorod hierarchs. E.E. Golubinsky says that because these hierarchs remained unknown at the time of their glorification, he determined this date for their common celebration was established in the period between the time of the Moscow Council of 1549 and the time of the formation of the Holy Synod (E.E. Golubinsky, History of the Canonization of Saints in the Russian Church. Moscow, 1903, p. 157).

The relics of these saints were buried or transferred to Novgorod’s Sophia Cathedral (except for Saint Germanus, Saint Gennadius and Saint Pimen) therefore, in some sources their names are not included in the Synaxis.