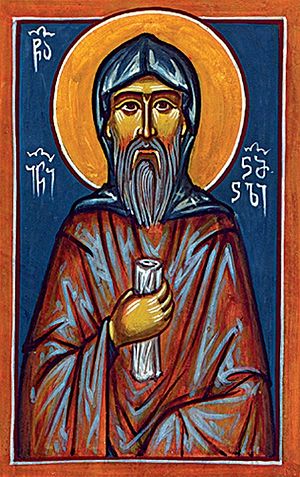 Little information about the life of Saint John of Chimchimeli has been preserved, but we know that he was a great translator, philosopher, and defender of the Georgian Christian Faith.

John received his education in present-day Bulgaria, at the literary school of the famous Petritsoni (now Bachkovo) Georgian Monastery.

One historian writes: “In his eulogy on the death of Saint Demetre the King, John the Philosopher of Chimchimeli brilliantly describes the glory, honor, and heroism of this holy man’s life.”

Saint John translated many exegetical compositions, including two commentaries on the Book of Ecclesiastes, one by Metrophanes of Smyrna (Metropolitan of Smyrna (857-880). His Commentary on Ecclesiastes is preserved only in Georgian.) and the other by Olympiodorus of Alexandria. (A 6th-century deacon who wrote a series of commentaries on the books of the Bible, not to be confused with the neoplatonist philosopher also of the 6th century.) He also translated An Explanation of the Gospel According to Saint Mark and An Explanation of the Gospel According to Saint Luke, both by Blessed Theophylactus of Bulgaria.

The works of our Holy Father John of Chimchimeli are fundamental to the canon of Georgian theological literature.

In his work Pilgrimage, the eminent eighteenth-century historian Archbishop Timote (Gabashvili) mentions John of Chimchimeli among the holy fathers portrayed in the frescoes at the Holy Cross Monastery in Jerusalem.

In the second half of the 19th century the historian Mose Janashvili wrote, in his History of the Georgian Church, that John of Chimchimeli directed a literary school in the village of Gremi in Kakheti.

According to Janashvili, students at Saint John’s school were instructed in philosophy and theology as well as in the Greek, Syrian, and Arabic languages.