St. Vsevolod (in holy baptism Gabriel) the Wonderworker of Pskov 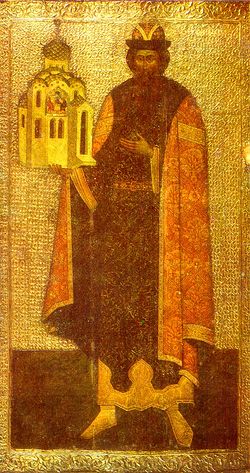 Holy Prince Vsevolod of Pskov, in Baptism Gabriel, a grandson of Vladimir Monomakh, was born at Novgorod, where in the years 1088-1093 and 1095-1117 his father ruled as prince. His father was the holy prince Saint Mstislav-Theodore the Great (April 15). In the year 1117, when Great Prince Vladimir Monomakh gave Mstislav Kievan Belgorod as his “udel” (land-holding), practically making him co-ruler, young Vsevolod remained as his father’s vicar in the Novgorod principality.

Holy Prince Vsevolod did much good for Novgorod. Together with the Archbishop of Novgorod, Saint Niphon (April 8), he raised up many churches, among which were the cathedral of the Great Martyr George at the Yuriev monastery, and the church of Saint John the Forerunner at Opokakh, built in honor of the “angel” (i.e. patron saint) of his first-born son John, who had died in infancy (+ 1128).

In his Ustav (Law code) the prince granted a special charter of lands and privileges to the cathedral of Holy Wisdom (Hagia Sophia) and other churches. During a terrible famine, he exhausted his entire treasury to save people from perishing. Prince Vsevolod was a valiant warrior, he marched victoriously against the Yam and Chud peoples, but he never took up the sword for lucre or power.

In 1132, upon the death of holy Great Prince Mstislav, Vsevolod’s uncle Prince Yaropolk of Kiev fulfilled the last wishes of his brother and transferred Vsevolod to Pereyaslavl, then regarded as the eldest city after Kiev itself. But the younger sons of Monomakh, Yuri Dolgoruky and Andrew Dobry, were apprehensive lest Yaropolk make Vsevolod his successor at Kiev, and so they marched out against their nephew. Hoping to avoid internecine strife, Saint Vsevolod returned to Novgorod, but was received there with disaffection. The Novgorodians felt that the prince had been “raised” by them and should not have left them earlier. “Vsevolod went to Rus, to Pereslavl,” noted the Novgorod chronicler, “and kissed the cross against the Novgorodians, saying, ‘I will kill you.’”

Striving to restore good relations with Novgorod, the prince undertook a victorious campaign against the Chud people in 1133, and he annexed Yuriev to the Novgorod domain. But a harsh winter campaign in 1135-1136 against Suzdal was unsuccessful. The stubborn people of Novgorod would not heed their chastisement by God, and they could not forgive the prince for their defeat. The assembly decided to summon a prince from the hostile Monomakh line of the Olgovichi, and they condemned Saint Vsevolod to banishment. “You suffered exile at the hands of your own people,” we sing in the troparion to the saint. For a month and a half they held the prince and his family under guard at the archbishop’s palace. When Prince Svyatoslav Olgovich arrived on July 15, 1136, Vsevolod was released from his captivity.

Vsevolod went again to Kiev, and his uncle Yaropolk gave him the Vyshgorod district near Kiev, the place where Saint Olga (July 11) had lived in the tenth century during the rule of her son Svyatoslav, “preferring the cities of Kiev and Pskov.” Saint Olga came to the defense of her descendant in 1137 when the people of Pskov, recalling the campaigns of the Novgorod-Pskov army led by the prince, invited him to the Pskov principality, the native region of Saint Olga. He was the first Pskov prince, chosen by the will of the Pskov people.

Among the glorious works of Saint Vsevolod-Gabriel at Pskov was the construction of the first stone church dedicated to the Life-Creating Trinity, replacing a wooden church from the time of Saint Olga. On the icons of the saint, he is often depicted holding the church of the Holy Trinity.

Saint Vsevolod ruled as prince at Pskov for only a year. He died on February 11, 1138 at the age of forty-six. All of Pskov gathered at the funeral of the beloved prince, and the chanting of the choir could scarcely be heard over the people’s wailing.

The people of Novgorod sent an archpriest from the Sophia cathedral to take his holy relics back to Novgorod. The prince, however, did not want his body to rest in Novgorod. He would not allow Novgorod to be deprived of his relics by the people of Pskov, who had driven him out, and the coffin would not move from the spot. The Novgorod people wept bitterly and repented in their misfortune. Then they asked to be given just a small piece of his relics “for the protection of their city.” Through their prayers a fingernail fell from the saint’s hand. The Pskov people put Saint Vsevolod into the temple of the holy Great Martyr Demetrius. Beside the grave they placed the military armaments of the prince, a shield and sword, in the shape of a cross, with the Latin inscription, “I will yield my honor to no one.”

On November 27, 1192, the relics of holy Prince Vsevolod were uncovered and transferred into the Trinity cathedral, in which a chapel was consecrated in his honor.

The deep spiritual bond of the city of Saint Olga with the holy Prince Vsevolod was never broken. He always remained a Pskov wonderworker. At the siege of Pskov by Stephen Bathory in 1581, when the walls of the fortress were already breached and the Poles were ready to rush into the city, they brought the holy relics of Prince Vsevolod from the Trinity cathedral to the place of battle, and the enemy withdrew.

On April 22, 1834, on the first day of Pascha, the saint’s holy relics were solemnly transferred to a new shrine in the main church of the cathedral.

At the appearance of the wonderworking Pskov-Protection Icon (October 1), holy Prince Vsevolod-Gabriel stood among the heavenly defenders of Pskov.