Righteous Theodora, wife of the Emperor Theophilus, the Iconoclast 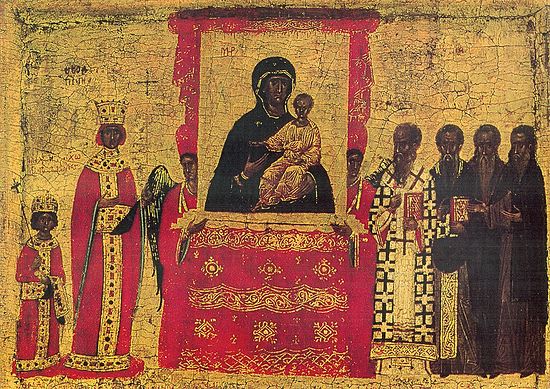 Holy Empress Theodora was the wife of the Byzantine emperor Theophilus the Iconoclast (829-842), but she did not share in the heresy of her husband and secretly venerated the holy icons. After the death of her husband, Saint Theodora governed the realm because her son Michael was a minor.

She convened a Council, at which the Iconoclasts were anathematized, and the veneration of icons was reinstated. Saint Theodora established the annual celebration of this event, the Triumph of Orthodoxy, on the first Sunday of the Great Fast. Saint Theodora did much for Holy Church and fostered a firm devotion to Orthodoxy in her son Michael.

When Michael came of age, she was retired from governing and spent eight years in the monastery of Saint Euphrosyne, where she devoted herself to ascetic struggles, and reading books that nourished her soul.

A copy of the Gospels, copied in her own hand, is known to exist. She died peacefully around the year 867.

In 1460, her relics were given by the Turks to the people of Kerkyra (Corfu).