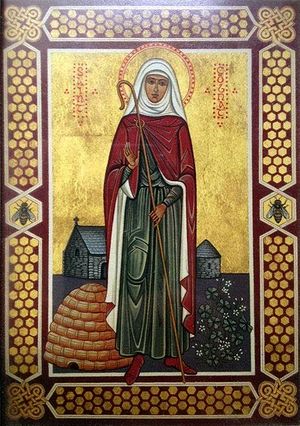 Saint Gobnata was born in Co.Clare at the end of the fifth, or the beginning of the sixth century. Later she fled to the Aran Islands to escape from some enemy. An angel appeared to her one day and told her to leave that place and to keep walking until she found nine white deer. She saw three white deer at Clondrohid, Co. Cork, and decided to follow them. Then at Ballymakeera, she saw six white deer. Finally, at Ballyvourney she came upon nine white deer grazing in a wood. There she was given land for a women’s monastery by her spiritual Father Saint Abban of Kilabban, Co. Laois (March 16), and he installed her as abbess. Excavations in 1951 proved that indeed there had been an early Christian settlement on the site.

Saint Gobnata was renowned for her gift of healing, and there is a story of how she kept the plague from Ballyvourney. She is also famous for her skill as a bee-keeper.

One day, Saint Gobnata was watching from a hill overlooking a valley as an invading chieftain and his army came through, destroying crops and driving off cattle. She sent the bees to attack them, and they were thrown into such confusion that they left without their plunder.

The holy virgin Saint Gobnata fell asleep in the Lord on February 11. The exact year of her death is not known, but it probably occurred in the sixth century. Although she is regarded as the patron saint of Ballyvourney, she is venerated throughout southern Ireland. There are churches dedicated to her in Waterford and Kerry, for example, and she is also revered in Scotland.