Venerable Stephen (In Monasticism Simeon), the Myrrhgusher and Prince of Serbia 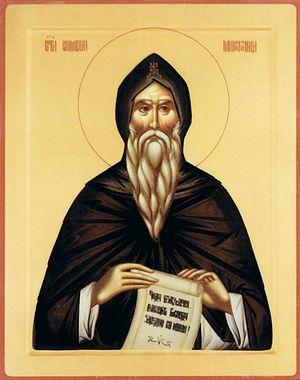 Saint Simeon the Myrrh-Gusher, King of Serbia Stephen Nemanya was the Great Zhupan of Serbia, and lived during the twelfth century. The saint toiled much for his fatherland: he united a large portion of the Serbian lands, and strove for the political independence of his country from the Byzantine Empire. In his zeal for the Orthodox Church, he defended his nation against heresy and false teaching.

At the age of eighty, Stephen went to Mt. Athos, where his son Saint Sava (January 12), was glorified by the holiness of his life. Together they restored the desolate Hilandar monastery, to which monks from various lands began to gather.

Saint Simeon was a great ascetic and wise guide for the monks. He died on February 13, 1200, and his relics began to exude myrrh. Saint Sava transported his father’s relics back to Serbia, and placed them in a church of the Most Holy Theotokos at the River Studenitsa. Saint Simeon had richly adorned this church while he was still ruler of Serbia.

You were illumined with the image of Godly grace, / And after death you have shone with the light of your life, / By issuing sweet-scented myrrh / Which flows from the tomb of your relics, / And sustains your people on this earth, / O our Father Simeon, discerner of the Way of God, / Pray to Christ our God that He may grant us His great mercy.