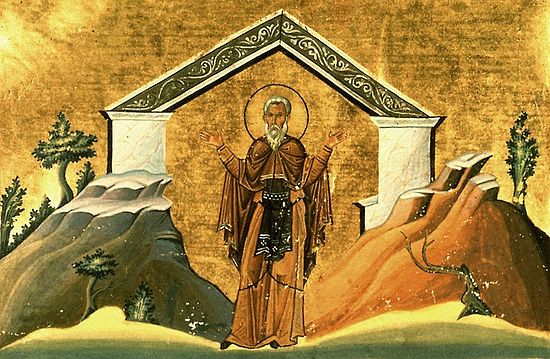 Saint Auxentius, by origin a Syrian, served at the court of the emperor Theodosius the Younger (418-450). He was known as a virtuous, learned and wise man, and he was, moreover, a friend of many of the pious men of his era.

Distressed by worldly vanity, Saint Auxentius was ordained to the holy priesthood, and then received monastic tonsure. After this he went to Bithynia and found a solitary place on Mount Oxia, not far from Chalcedon, and there he began the life of a hermit (This mountain was afterwards called Mt. Auxentius). The place of the saint’s efforts was discovered by shepherds seeking their lost sheep. They told others about him, and people began to come to him for healing. Saint Auxentius healed many of the sick and the infirm in the name of the Lord.

In the year 451 Saint Auxentius was invited to the Fourth Ecumenical Council at Chalcedon, where he denounced the Eutychian and Nestorian heresies. Familiar with Holy Scripture and learned in theology, Saint Auxentius easily bested those opponents who disputed with him. After the end of the Council, Saint Auxentius returned to his solitary cell on the mountain. With his spiritual sight he saw the repose of Saint Simeon the Stylite (459) from a great distance.

Saint Auxentius died about the year 470, leaving behind him disciples and many monasteries in the region of Bithynia. He was buried in the Monastery of Saint Hypatius at Rufiananas, Syria.

You delighted in abstinence, / restraining the desires of the flesh. / Divinely wise and holy Father Auxentius, / you were revealed to be shining with faith, / blossoming like a plant in the midst of paradise.