St. Leo the Bishop of Catania in Sicily 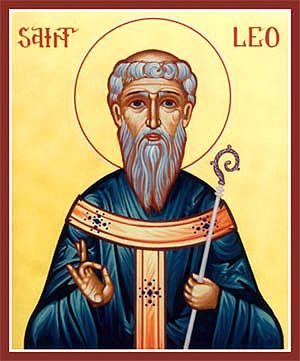 Saint Leo was bishop of the city of Catania, in Sicily. He was famed for his benevolence and charity, and his Christian love for the poor and the vagrant. The Lord granted him the gifts of healing various illnesses, and working miracles.

When Saint Leo was Bishop of Catania, there was a certain sorcerer named Heliodorus, who impressed people with his fake miracles. This fellow was originally a Christian, but then he rejected Christ and became a servant of the devil.

Saint Leo often urged Heliodorus to repent of his wicked deeds and return to God, but in vain. Once, Heliodorus impudently entered the church where the bishop was serving, and tried to create a disturbance, sowing confusion and temptation by his sorcery.

Seeing the people beset by devils under the sorcer’s spell, Saint Leo realized that the time for gentle persuasion had passed. He calmly emerged from the altar and, tying his omophorion around the magician’s neck, he led him out of the church into the city square. There he forced Heliodorus to admit to all his wicked deeds. He commanded that a fire be lit, and jumped into the fire with the sorcerer. Thus they stood in the fire until Heliodorus got burnt. Saint Leo, by the power of God, remained unharmed. This miracle brought Saint Leo great renown during his lifetime.

When he died, a woman with an issue of blood received healing at his grave. The body of the saint was placed in a church of the holy Martyr Lucy (December 13), which he himself had built. Later on, his relics were transferred into the church of Saint Martin the Merciful, Bishop of Tours (November 11).

With hymns of praise let us crown Leo, / who was consecrated to the Lord from early childhood; / he received grace while still a babe in swaddling clothes. / He is a brightly shining star in the Church: / its valiant defender and firm support!