St. Eustathius the Archbishop of Antioch 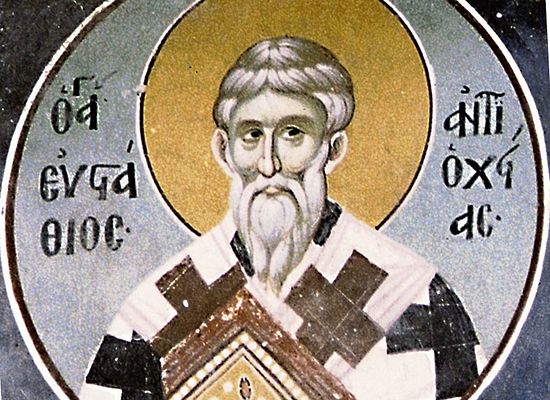 Saint Eustathius, Archbishop of Antioch (323-331) was born in Side, Pamphylia in 324. He was Bishop of Beroea (modern Aleppo), and enjoyed the love and esteem of the people, and at the request of his flock he was elevated by the Fathers of the First Ecumenical Council (325) to the See of Antioch.

Saint Eustathius was a learned theologian, and was also distinguished by his broad knowledge in secular sciences. When the heresy of Arius began to spread in the East (Arianism denied the consubstantiality of the Son of God with the Father), Saint Eustathius struggled zealously for the purity of the Orthodox Faith through his words and his writings.

The First Ecumenical Council was convened in the year 325 by the holy God-crowned Emperor Constantine the Great (306-337). The first to preside over this Council was Saint Eustathius. The Council condemned the heretical teachings of Arius and incorporated the Orthodox confession into the Symbol of Faith (the Nicene Creed).

But the mad Arius, as Saint Eustathius called him, refused to renounce his errors. He and those who shared his opinion were excommunicated from the Church by the Council. Among the bishops who signed the Nicene Symbol of Faith were some who sympathized with the heresy of Arius, but signed the Acts of the Council through fear of excommunication.

After the Council, his enemies plotted against Saint Eustathius. With great cunning they gained his consent to convene a local Council at Antioch. Having bribed a certain profligate woman, they persuaded her to appear at the Council with an infant at her breast, and falsely declare that Saint Eustathius was the father of the infant.

The Arians declared Saint Eustathius deposed, violating the Apostolic Rule that accusations against the clergy must be substantiated by two witnesses. Without a trial he was sent off into exile in Thrace. But the lie was soon unmasked: the woman repented after falling grievously ill. She summoned the clergy, and in the presence of many people, she confessed her sin.

Saint Constantine the Great died around this time, and his son Constantius (337-361), who shared the heretical views of Arius and favored the Arian bishops, succeeded his father on the throne. Even in exile, Saint Eustathius struggled for Orthodoxy with the same zeal. He died in exile, in the city of Philippi or Trajanopolis, in the year 337.

Convened in the year 381 at Constaninople, the Second Ecumenical Council confirmed the Orthodox Symbol of Faith, which Saint Eustathius had so vigorously defended. The Arian heresy was once again anthematized.

In the year 482 the relics of Saint Eustathius were reverently transferred from Philippi to Antioch, to the great joy of the Antioch people, who had not ceased to honor and love their patriarch.

Saint Eustathius was esteemed by the great hierarchs of the fourth century: Basil the Great, John Chrysostom, Athanasius of Alexandria, Epiphanius of Cyprus, Anastasius of Sinai, and Jerome of Stridonia. The renowned church historian Bishop Theodoret of Cyrrhus calls Saint Eustathius a pillar of the Church and a man of piety, of equal stature with Saint Athanasius of Alexandria and the other bishops at the forefront of the struggle for Orthodoxy.