St. Tarasius the Archbishop of Constantinople 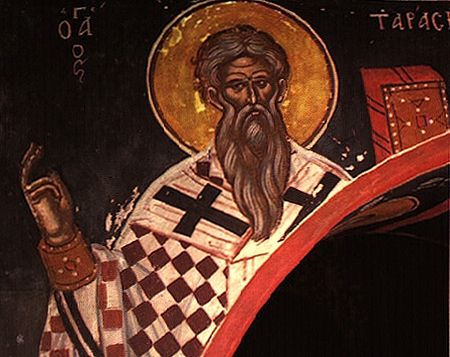 Saint Tarasius, Patriarch of Constantinople was of illustrious lineage. He was born and raised in Constantinople, where he received a fine education. He was rapidly promoted at the court of the emperor Constantine VI Porphyrogenitos (780-797) and Constantine’s mother, the holy Empress Irene (August 7), and the saint attained the rank of senator.

During these times the Church was agitated by the turmoil of the Iconoclast disturbances. The holy Patriarch Paul (August 30) although he had formerly supported Iconoclasm, later repented and resigned his office. He withdrew to a monastery, where he took the schema. When the holy Empress Irene and her son the emperor came to him, Saint Paul told them that the most worthy successor to him would be Saint Tarasius (who at this time was still a layman).

Tarasius refused for a long time, not considering himself worthy of such high office, but he then gave in to the common accord on the condition, that an Ecumenical Council be convened to address the Iconoclast heresy.

Proceeding through all the clerical ranks in a short while, Saint Tarasius was elevated to the patriarchal throne in the year 784. In the year 787 the Seventh Ecumenical Council was convened in the city of Nicea, with Patriarch Tarasius presiding, and 367 bishops attending. The veneration of holy icons was confirmed at the council. Those bishops who repented of their iconoclasm, were again received by the Church.

Saint Tarasius wisely governed the Church for twenty-two years. He led a strict ascetic life. He spent all his money on God-pleasing ends, feeding and giving comfort to the aged, to the impoverished, to widows and orphans, and on Holy Pascha he set out a meal for them, and he served them himself.

The holy Patriarch fearlessly denounced the emperor Constantine Porphyrigenitos when he slandered his spouse, the empress Maria, the granddaughter of Saint Philaretos the Merciful (December 1), so that he could send Maria to a monastery, thus freeing him to marry his own kinswoman. Saint Tarasius resolutely refused to dissolve the marriage of the emperor, for which the saint fell into disgrace. Soon, however, Constantine was deposed by his own mother, the Empress Irene.

Saint Tarasius died in the year 806. Before his death, devils examined his life from the time of his youth, and they tried to get the saint to admit to sins that he had not committed. “I am innocent of that of which you accuse me,” replied the saint, “and you falsely slander me. You have no power over me at all.”

Mourned by the Church, the saint was buried in a monastery he built on the Bosphorus. Many miracles took place at his tomb.

You shone forth as a light of the Spirit, / adorned with an exemplary life and clothed in hierarchical vesture. / You stilled the turbulence of heresy / and became a pillar and foundation of the Church, / which praises your struggles, holy Father Tarasius.

You illumined the Church with Orthodox doctrine / and taught all to venerate and honor the precious image of Christ. / You vanquished the godless doctrine of the iconoclasts. / Therefore we cry to you: / “Rejoice, wise Father Tarasius.”