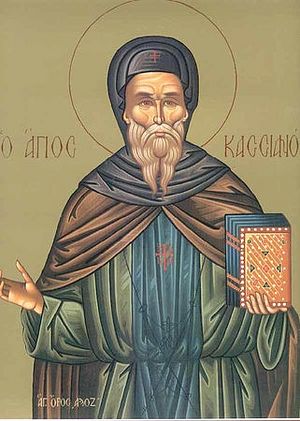 Saint John Cassian the Roman was born around 360, probably in Lesser Scythia (in Dacia Pontica). His pious Christian parents gave him an excellent classical education, and also instructed him in the Holy Scriptures and in the spiritual life.

Saint John entered a monastery in the diocese of Tomis, where his friend and relative Saint Germanus labored as an ascetic. In 380, desiring to venerate the Holy Places, Saint John went to Jerusalem with his sister and his friend Saint Germanus. The two monks stayed at a Bethlehem monastery, not far from where the Savior was born.

After five years at the monastery, Saints John and Germanus traveled through the Thebaid and the desert monasteries of Sketis for seven years, drawing upon the spiritual experience of countless ascetics. The Egyptian monks taught them many useful things about spiritual struggles, prayer, and humility. Like honeybees they journeyed from place to place, gathering the sweet nectar of spiritual wisdom. The notes Saint John made formed the basis of his book called CONFERENCES WITH THE FATHERS in twenty-four chapters.

Returning to Bethlehem for a brief time, the spiritual brothers lived for three years in complete solitude. Then they went back to Egypt and lived there until 399. Because of the disturbances caused by Archbishop Theophilus of Alexandria to the monasteries along the Nile, they decided to go to Constantinople, after hearing of the virtue and holiness of Saint John Chrysostom. The great hierarch ordained Saint John Cassian as a deacon and accepted him as a disciple. John and Germanus remained with Saint John Chrysostom for five years, learning many profitable things from him.

When Chrysostom was exiled from Constantinople in 404, Saints John Cassian and Germanus went to Rome to plead his case before Innocent I. Cassian was ordained to the holy priesthood in Rome, or perhaps later in Gaul. After Chrysostom’s death in 407, Saint John Cassian went to Massilia [Marseilles] in Gaul (now France). There he established two cenobitic monasteries in 415, one for men and another for women, based on the model of Eastern monasticism.

At the request of Bishop Castor of Aptia Julia (in southern Gaul), Cassian wrote THE INSTITUTES OF CENOBITIC LIFE (De Institutis Coenobiorum) in twelve books, describing the life of the Palestinian and Egyptian monks. Written between 417-419, the volume included four books describing the clothing of the monks of Palestine and Egypt, their schedule of prayer and services, and how new monks were received into the monasteries.The last eight books were devoted to the eight deadly sins and how to overcome them. Through his writings, Saint John Cassian provided Christians of the West with examples of cenobitic monasteries, and acquainted them with the asceticism of the Orthodox East.

Cassian speaks as a spiritual guide about the purpose of life, about attaining discernment, about renunciation of the world, about the passions of the flesh and spirit, about the hardships faced by the righteous, and about prayer.

Saint John Cassian also wrote CONFERENCES WITH THE FATHERS (Collationes Patrum) in twenty-four books in the form of conversations about the perfection of love, about purity, about God’s help, about understanding Scripture, about the gifts of God, about friendship, about the use of language, about the four levels of monasticism, about the solitary life and cenobitic life, about repentance, about fasting, about nightly meditations, and about spiritual mortification. This last has the explanatory title “I do what I do not want to do.”

In 431 Saint John Cassian wrote his final work, ON THE INCARNATION OF THE LORD, AGAINST NESTORIUS (De Incarnationem Domini Contra Nestorium). In seven books he opposed the heresy, citing many Eastern and Western teachers to support his arguments.

In his works, Saint John Cassian was grounded in the spiritual experience of the ascetics, and criticized the abstract reasoning of Saint Augustine (June 15). Saint John said that “grace is defended less adequately by pompous words and loquacious contention, dialectic syllogisms and the eloquence of Cicero (i.e. Augustine), than by the example of the Egyptian ascetics.” In the words of Saint John of the Ladder (March 30), “great Cassian reasons loftily and excellently.” His writings are also praised in the Rule of Saint Benedict.

Saint John Cassian lived in the West for many years, but his spiritual homeland was the Orthodox East. He fell asleep in the Lord in the year 435. His holy relics rest in an underground chapel in the Monastery of Saint Victor in Marseilles. His head and right hand are in the main church.

Having cleansed yourself through fasting, / You attained the understanding of wisdom, / And from the desert fathers You learned the restraint of the passions. / To this end through your prayers grant our flesh obedience to the spirit. / For you are the teacher, O venerable John Cassian, / Of all who in Christ praise your memory.

The image of God was truly preserved in you, O Father, / for you took up the Cross and followed Christ. / By so doing you taught us to disregard the flesh for it passes away / but to care instead for the soul, since it is immortal. / Therefore your spirit, venerable John Cassian, rejoices with the angels.

As a venerable monk, / You consecrated your life to God, / And radiant with virtue, O John Cassian, / You shine like the sun with the splendor of your divine teachings, / Illumining ever the hearts of all who honor you. / Entreat Christ earnestly in behalf of those / Who praise you with fervent love.