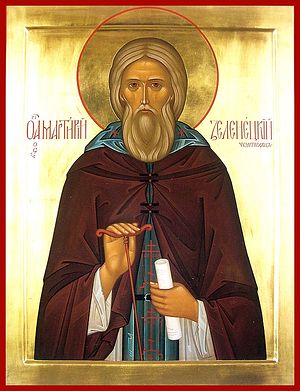 Saint Martyrius of Zelenets, in the world Menas, was born in the city of Veliki Luki (Great Meadow) in the sixteenth century. His parents, Cosmas and Stephanida, died when he was just ten years old. He was raised by his spiritual Father, a priest of the city’s Annunciation church, and the child’s soul cleaved to God.

The widowed priest Boris became a monk with the name Bogolep at the Trinity-Sergius monastery in Veliki Luki. Menas often visited him at the monastery, and later on he himself received monastic tonsure there taking the name Martyrius. For seven years both teacher and disciple toiled for the Lord unrelentingly in a single cell, encouraging each other in deeds of work and prayer. Saint Martyrius had the obediences of “kellarios” [cellarer], treasurer, and “ponomar” [or altar server].

It was at this time that the Mother of God first showed Her special solicitude for Saint Martyrius. At mid-day he dozed off in the bell tower and beheld the Tikhvin (Hodigitria) icon of the Most Holy Theotokos in a fiery column. The monk venerated it, and it was still hot from the fiery column. When he awoke, he still felt this heat on his forehead.

On the spiritual advice of Saint Martyrius, the grievously ill monk Abramius went to venerate the wonderworking Tikhvin Icon of the Mother of God, and he received healing. Saint Martyrius was filled with intense faith in the intercession of the Mother of God. He began to pray that the Heavenly Queen would show him where he might go for the ascetic feat of complete silence, for which his soul yearned.

The monk secretly withdrew into a desolate place situated 60 versts from Veliki Luki. As he himself writes, “in this wilderness I received fearful visitations from demons, but I prayed to God, and the demons were put to shame.”

In a letter to Elder Bogolep, Saint Martyrius asked his blessing to dwell in the wilderness, but the spiritual father advised him to return to the cenobitic life where he would be of use to the brethren. Not daring to disobey his experienced Elder, and not knowing how to proceed, Saint Martyrius went to Smolensk to venerate the wonderworking Hodigitria [She who leads the way] Icon of the Mother of God and the relics of Saints Abramius and Ephraim (August 21). These saints appeared to Saint Martyrius in a dream, and they reassured him that he would be permitted to live in the wilderness, “wherever God will bless and the Most Holy Theotokos will guide you.”

Saint Martyrius then went to the Tikhvin monastery, hoping that the Mother of God would resolve his dilemma. The monk Abramius, who remained at this monastery in gratitude to the Mother of God for his healing, told Saint Martyrius about a secret place, over which he had seen a radiant Cross of stars. This time he received the blessing of the Elder. Saint Martyrius took with him two small icons: one of the Life-Creating Trinity, and the other of the Tikhvin Mother of God. He then settled in Zelents (the green island), which was a beautiful island in a forested swamp.

Harsh and painful was the life of the monk in the wilderness, but neither cold, nor deprivation, nor wild beasts, nor the wiles of the Enemy were able to shake his resolve. He built a small chapel for the glorification of, and in gratitude to, the Lord and the Most Holy Theotokos. He was again deemed worthy to see an icon of the Mother of God in a dream. This time it was floating on the sea. To the right of the icon he saw the Archangel Gabriel who told him to venerate the icon. Saint Martyrius went into the water, and the icon began to sink in the sea. The saint then cried out, and a wave carried him to shore. With that, the icon vanished.

The wilderness was sanctified by the life of the hermit, and many began to arrive, not only to be instructed by the word and example of the monk, but also to settle there with him. The increased number of disciples prompted the monk to build a church dedicated to the Life-Creating Trinity, where he placed his own icons of the Trinity and of the Tikhvin Mother of God. As a sign of the grace of God resting upon the monastery of Saint Martyrius, his disciple Saint Gurias was permitted to see a Cross in the heavens, shining over the cross on top of the church.

This was the beginning of the Trinity Zelenets monastery, “the green wilderness monastery of Martyrius.” The Lord blessed his labors, and the grace of God shone visibly upon him. The fame of his discernment and gift of healing became known to many. Many eminent people of Novgorod began to send gifts to the monastery. With funds provided by the pious boyar Theodore Syrkov, a heated church was built and consecrated in honor of the Annunciation of the Most Holy Theotokos in memory of the first church at Veliki Luki, from which the saint had begun his path to God.

Saint Martyrius continued to receive help from the Mother of God. She appeared to him on a bench in the corner where the icons stood. The saint recalled: “I looked upon Her without lowering my eyes... I gazed upon Her holy face, at her eyes filled with tears, ready to trickle down Her all-pure face. I awoke from the dream and was afraid. I lit a candle from the lampada, in order to see whether or not the Most Pure Virgin sat at the place where I saw Her in the dream. I went up to the icon of the Hodigitria and was convinced that in truth the Mother of God had appeared to me as She is depicted on my icon.”

Soon after this (about the year 1570) Saint Martyrius was ordained priest at Novgorod by the archbishop (Alexander or Leonid). He was already an igumen in 1582.

Later, the Lord granted the Zelenets wilderness monastery an even wealthier benefactor. In 1595 at Tver Saint Martyrius resurrected the son of the former Kasimov ruler Simeon Bekbulatovich, praying in front of his own icons of the Life-Creating Trinity and the Tikhvin Mother of God. He placed both icons upon the chest of the dead child, and he awoke as if from sleep. In gratitude Simeon built a church in honor of the Tikhvin Icon of the Mother of God and of Saint John Chrysostom, the Heavenly patron saint of the ruler’s son John.

In 1595 Tsar Theodore endowed the monastery with a sufficient quantity of land for its support.

Having reached a great old age and preparing for death, Saint Martyrius dug a grave for himself, and near it he placed a coffin fashioned by his own hands. He often came there to weep. Sensing his imminent departure, the monk assembled the brethren and told his children in the Lord to have steadfast hope in the Most Holy Trinity and to trust the Mother of God, as he himself had always trusted in Her. After receiving the Holy Mysteries of Christ, he gave the brethren his blessing with the words: “Peace to all the Orthodox.” With spiritual joy he fell asleep in the Lord on March 1, 1603.

The saint was buried in the grave he dug near the church of the Mother of God. Later, his holy relics rested beneath a crypt in the church of the Most Holy Trinity, beneath the lower temple in honor of Saint John the Theologian. Cornelius, a former monk of the Zelenets monastery, and later Metropolitan of Kazan and Novgorod (+ 1698), compiled a service and wrote the Life of Saint Martyrius, making use of personal notes and the saint’s testament.

The memory of Saint Martyrius of Zelenets and Veliki Luki is celebrated also on November 11.