Icon of the Mother of God “Enthroned” 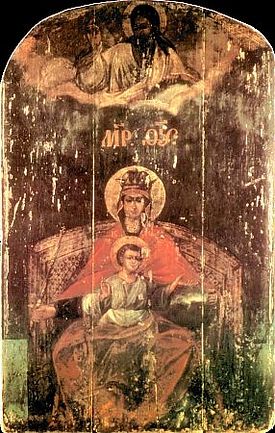 Photo: Days.Pravoslavie.Ru
The “Enthroned” (or “Reigning”) Icon of the Mother of God appeared on March 2, 1917, the day of Tsar Nicholas’s abdication, in the village of Kolomskoye near Moscow.

In February 1917, an elderly woman named Eudokia saw the Mother of God in a dream telling her to go to Kolomskoye to find a large blackened icon in a church. After the vision was repeated three times, she went to Kolomskoye to search for the icon with the priest Nicholas.

In the basement of the church they found the icon and started wiping off the accumulated dust. Then they were able to see the Most Holy Theotokos wearing a crown and sitting on a throne. Immediately, Father Nicholas celebrated a service of Thanksgiving and an Akathist.

News of the icon’s discovery spread throughout Russia, and there were several miracles of healing from physical and mental infirmities. As time went by, the icon renewed itself and became brighter and brighter. Particularly striking was the blood-red robe of the Virgin.

Since the icon was revealed just as the Tsar abdicated, many people believed that the Queen of Heaven had assumed royal authority over the Russian land, and so the icon became known as the “Enthroned” (or Reigning) icon. It was discovered that the icon had come from the Ascension convent in Moscow. In 1812, before Napoleon’s invasion, this icon and others were sent to Kolomskoye’s Ascension church for safekeeping. Apparently forgotten, the icons were never returned to Moscow.

The original icon is said to be in the Novodevichy Museum in Moscow, and there is a copy in the Church of the Kazan Mother of God in Kolomskoye.

The “Enthroned” or “Reigning” Icon, which belongs to the Panachranta type, shows the Theotokos seated on a throne with Her Son.