Martyrs Eutropius and Cleonicus of Amasea, and Basiliscus of Comana 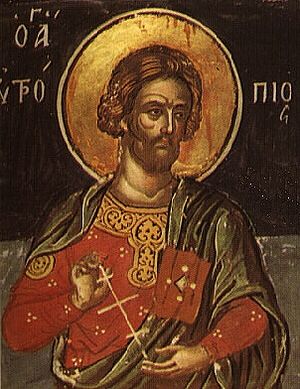 Martyr Eutropius
The Holy Martyrs Eutropius, Cleonicus and Basiliscus suffered in the city of Pontine Amasea (Asia Minor) in about the year 308.

The brothers Eutropius and Cleonicus, and Basiliscus the nephew of the Great Martyr Theodore the Recruit (February 17), were comrades. After the martyric death of Saint Theodore, they wound up in prison and by their preaching brought many of the pagans in prison with them to the Christian Faith.

When he tortured Saint Theodore, Publius perished shamefully, struck down by divine wrath. Asclepiodotus was chosen as ruler of Amasea, and was more inhumane than his predecessor. Knowing the comrades of Saint Theodore the Recruit were all in prison, the governor commanded that they be brought to him. Saints Eutropius, Cleonicus and Basiliscus thus firmly confessed their faith in Christ before this new governor. They were mercilessly beaten, so that their bodies were entirely bruised.

As he was being tortured Saint Eutropius prayed loudly to the Savior, “Grant us, O Lord, to endure these wounds for the sake of the crown of martyrdom, and help us, as You helped Your servant Theodore.” In answer to the saint’s prayer, the Lord Himself appeared to the martyrs with His angels and the holy Great Martyr Theodore the Recruit, saying to them: “Behold, the Savior has come to help you, that you may know life eternal.”

Soldiers and many of the people standing nearby were also granted to behold the Savior. They urged Asclepiodotus to halt the tortures. Seeing that the people were distraught and ready to believe in the true God, the governor commanded the martyrs to be taken away. The governor then invited Saint Eutropius to supper and urged him to offer public sacrifice to the pagan gods, yet remain a Christian in soul. Eutropius refused this offer. 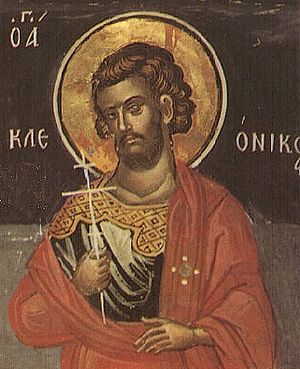 Martyr Eutropius
On the following day they brought the martyrs to a pagan temple, to force them to offer sacrifice. Eutropius entreated the Savior: “Lord, be with us, and destroy the raging of the pagans. Grant that on this place the Bloodless Sacrifice of the Christians be offered to You, the true God.” No sooner had these last words been spoken, than an earthquake began. The walls of the temple collapsed, and the statue of the goddess Artemis was smashed to bits. Everyone fled from the temple to avoid being crushed among the rubble. In the noise of the earthquake a voice was heard from on high: “Your prayer has been heard, and on this place a house of Christian prayer shall be built.”

When the earthquake ended, the governor Asclepiodotus, barely recovered from his fright, gave orders to drive high wooden stakes into the ground, tie the martyrs to them and pour boiling tar over them. The saints began to pray to God, and Eutropius cried out turning to the torturers: “May the Lord turn your deed against you!”

The tar began to flow beside the bodies of the martyrs, like water with marble, scorching the torturers. Those seeing this fled in terror, but the governor in his bitterness gave orders to rake their bodies with iron hooks and to sting their wounds with mustard mixed with salt and vinegar. The saints endured these torments with remarkable firmness.

The night before their execution the saints spent their time at prayer, and again the Lord appeared to them and strengthened them.

On the morning of March 3, Saints Eutropius and Cleonicus were crucified, but Basiliscus was left in prison. 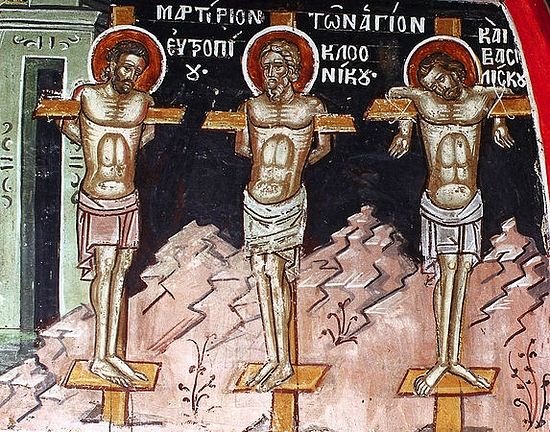 Martyrs Eutropius and Cleonicus of Amasea, and Basiliscus of Comana. Photo: Days.Pravoslavie.Ru

Saint Basiliscus was executed on May 22 in the city of Komana. They beheaded him, and threw his body into a river, but Christians found his relics and buried them in a ploughed field. Later at Komana a church was built and dedicated to Saint Basiliscus.

An account of the life of the holy martyr is found under May 22.

Let us praise Eutropius, Basiliscus and divine Cleonicus, / The three holy athletes of Christ. / They surpassed human endurance in their contests / And professed the supremacy of the Trinity. / Now they ceaselessly intercede that we all may be saved!

Eutropius, Basiliscus and Cleonicus, / Bound together in unity of faith, / By their noble contest speedily destroyed the enemies’ ranks!