Martyr Wenceslaus the Prince of the Czechs 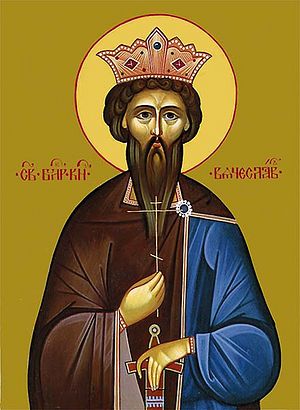 The Holy Prince Wenceslaus (Vyacheslav) of the Czechs was a grandson of the holy Martyr and Princess Ludmilla (September 16), and he was raised by her in deep piety. He began to rule at age eighteen after the death of his father Prince Bratislav (+ 920).

In spite of his youthful age, he ruled wisely and justly and concerned himself much about the Christian enlightenment of the people. The holy prince was a widely educated man, and he studied in the Latin and Greek languages.

Saint Wenceslaus was peace-loving. He built and embellished churches, and in Prague, the Czech capital, he raised up a magnificent church in the name of Saint Vitus, and he had respect for the clergy. Envious nobles decided to murder the saint and, at first, to incite his mother against him, and later to urge his younger brother, Boleslav, to occupy the princely throne.

Boleslav invited his brother to the dedication of a church, and then asked him to stay another day. In spite of the warnings of his servants, the holy prince refused to believe in a conspiracy and exposed his life to the will of God. On the following day, September 28, 935, when Wenceslaus went to Matins, he was wickedly murdered at the doors of the church by his own brother and his brother’s servants. His body was stabbed and discarded without burial.

The mother, hearing of the murder of her son, found and placed his body in a recently consecrated church at the princely court. They were not able to wash off the blood splashed on the church doors, but after three days it disappeared by itself.