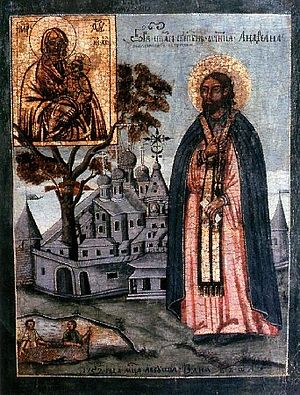 Photo: Days.Pravoslavie.Ru
Saint Adrian of Poshekhonye was born at Rostov the Great at the end of the sixteenth century, of pious parents named Gregory and Irene. Saint Adrian received monastic tonsure at the monastery of Saint Cornelius of Komel (May 19).

Three years after the death of Saint Cornelius, Saint Adrian, then a hierodeacon, greatly desired to go into a wilderness place and found a monastery in honor of the Most Holy Theotokos. The Lord helped him fulfill his intention. A certain unknown Elder of striking appearance came to the Corniliev monastery. Saint Adrian asked him his name, and the Elder referred to himself as “the lowly one.”

When Saint Adrian invited him to his own cell and asked him to say something beneficial for the soul, the Elder said that he would show Saint Adrian the spot where he should build the church and monastery of the Most Holy Theotokos.

Saint Adrian immediately went to the Superior, Igumen Laurence, and sought his blessing to live in the wilderness. Recalling Saint Cornelius’s order that any monks who wished to withdraw into the wilderness should be released from the monastery, Igumen Laurence did not hinder Saint Adrian but gave him his blessing. He also sent with him his assistant, Elder Leonid. After they prayed at the grave of Saint Cornelius, Saint Adrian and Elder Leonid went on their way, led by the mysterious black-robed monk. Saint Adrian carried with him an icon of the Dormition of the Mother of God, which he also painted.

On September 13, 1540, the eve of the Feast of the Exaltation of the Cross of the Lord, Saint Adrian and Elder Leonid arrived in the wild Poshekhonye forest, near the settlements of Belta, Patrabolsha, Shelshedolsk and Ukhorsk.

They halted at the banks of the River Votkha. There the Elder leading them suddenly became invisible. The astonished travelers began to chant the Canon and service of the Feast, with tears of thanks to God. Indeed this was a portent of the future fame of the monastery, a place where God would be glorified.

For three years Saint Adrian and the Elder Leonid survived in the wilderness solitude, suffering want, overcoming temptations from the devil and the whisperings of wicked folk, and then they began to fulfill their intention. Choosing a suitable moment, the ascetics went to Moscow to ask the blessing of Metropolitan Macarius to establish a monastery and church in honor of the Dormition of the Mother of God on the Poshekhonye side of the River Votkha.

Saint Macarius gave his blessing to the ascetics to build the monastery, and he gave them a written document to that effect. He ordained Adrian to the priesthood and elevated him to the rank of igumen. In the document he had given to Saint Adrian, the hierarch bade “priests, deacons, monks and laymen to listen to him and obey him in everything, as befits a pastor and teacher.”

At Moscow the Poshekhonye ascetics found generous benefactors who gave the monks abundant offerings to build their church. Returning to their wilderness spot on May 31, 1543, Saint Adrian laid the foundations for the church with a trapeza, in honor of the Dormition of the Most Holy Theotokos.

Having embellished and consecrated the new church, Saint Adrian began the construction of the monastery. The strict monastic Rule of Saint Cornelius was introduced at the monastery. Having nothing of their own, a little being sufficient for everyone, the saints devoted a large portion of their time to prayer, both in church and in their cells, and no small time was allotted to the reading of Holy Scripture. This reading was done “not in an elegant voice, nor for effect, but in a humble and mild voice. One reads, and another speaks of what is read.” They also read in private.

In addition to his duties as igumen, Saint Adrian also occupied himself with painting icons. When his holy soul longed for complete silence, he withdrew into the depths of the forest into the cell and chapel he had built one verst away from the monastery.

Six years after the founding of the monastery, Elder Leonid reposed. Saint Adrian and the brethren buried him with reverence. The number of the brethren had increased during this time. They built three cells as dwellings, and a fourth for preparing food and baking bread.

Saint Adrian began to make plans for the construction of a large stone church, and he gathered a sum of money for this purpose. One year after the repose of Elder Leonid, during Great Lent of 1550, on the eve of the commemoration of the 42 Ammoreian Martyrs (March 6), armed robbers burst into the monastery and murdered Saint Adrian after beating him.

The holy relics of Saint Martyr Adrian were uncovered on December 17, 1626, solemnly transferred into the monastery church and placed in an open crypt by the right kliros (choir). Many miracles occurred at the grave of Saint Adrian.