St. Mark the Ascetic of Egypt 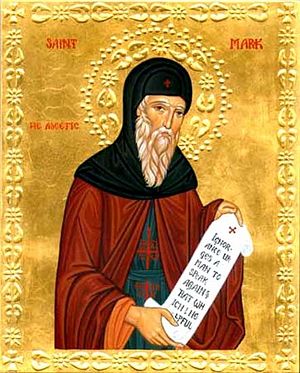 Saint Mark the Ascetic was born in Athens during the fifth century, and became a monk in the Nitrian desert (Lower Egypt). From his youth his fondest pursuit was the reading of Holy Scripture. It is said that he knew the whole Bible by heart.

Nine of his thirty discourses have come down to us. Three of them are in Volume I of the English PHILOKALIA. The Byzantines had such a high regard for his writings that they said, “Sell everything and buy Mark.”

He was noted for his gentleness and purity of soul. He was known as “the Ascetic” because of his abstinence. He lived for ninety years as a solitary, then surrendered his soul to God when he was one hundred and twenty years old.