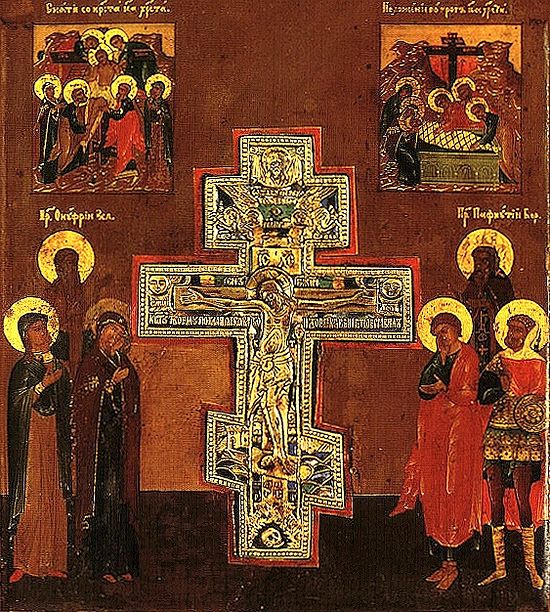 The Holy Empress Helen uncovered the Precious Cross and Nails of the Lord at Jerusalem in 326.

At the beginning of the reign of Saint Constantine the Great (306-337), the first Roman emperor to recognize Christianity, he and his pious mother Saint Helen decided to rebuild the city of Jerusalem. They also planned to build a church on the site of the Lord’s suffering and Resurrection, in order to reconsecrate and purify the places connected with the Savior’s death and Resurrection from the foul taint of paganism.

The empress Helen journeyed to Jerusalem with a large quantity of gold. Saint Constantine wrote a letter to Patriarch Macarius I (313-323), requesting him to assist her in every possible way with her task of the restoring the Christian holy places.

After her arrival in Jerusalem, the holy empress Helen began to destroy all the pagan temples and reconsecrate the places which had been defiled by the pagans.

In her quest for the Life-Creating Cross, she questioned several Christians and Jews, but for a long time her search remained unsuccessful. Finally, an elderly Hebrew named Jude told her that the Cross was buried beneath the temple of Venus. Saint Helen ordered that the pagan temple be demolished, and for the site to be excavated. Soon they found Golgotha and the Lord’s Sepulchre. Not far from the spot were three crosses, a board with the inscription written by Pilate (John 19:19), and four nails which had pierced the Lord’s Body.

Now the task was to determine on which of the three crosses the Savior had been crucified. Patriarch Macarius saw a dead person being carried to his grave, then he ordered that the dead man be placed upon each cross in turn. When the corpse was placed on the Cross of Christ, he was immediately restored to life. After seeing the raising of the dead man, everyone was convinced that the Life-Creating Cross had been found. With great joy the empress Helen and Patriarch Macarius lifted the Life-Creating Cross and displayed it to all the people standing about.